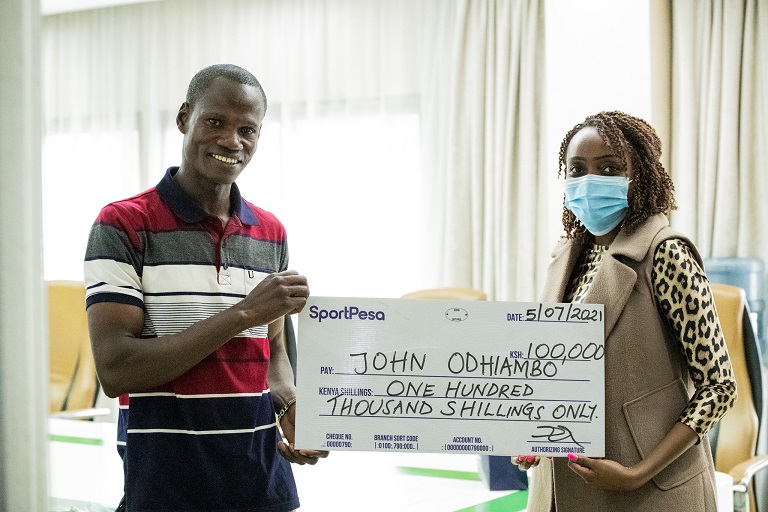 John Omiti became the latest winner in SportPesa’s Jijenge na Euros campaign after he was picked as the weekly winner of KSHs 100,000 on Monday morning.

The campaign, which is running until the end of the European tournament, has been gifting 10 daily winners KSHs 1,000 and at the end of the week one lucky winner receives KSHs 100,000.

The father of four could not contain his excitement as he explained how he received the news of his win courtesy of the gaming company.

“I was at work in Baringo when I heard the news that I was the weekly winner of KSHs 100,000. I actually could not believe it.

“This is such a blessing from God because there are so many things that I have planned for my future, and this will get me started right,” Omiti stated.

Omiti is the third winner of the handsome KSHs 100,000 prize and after the July 11 final, one lucky gamer will become a millionaire with a KSHs 1,000,000 reward.

He admitted that despite his team of choice, France being knocked out of the continental showpiece, he is still keen on watching all the games that remain.

Locally, he is a staunch supporter of Gor Mahia FC, insisting that despite their current 4th place standing on the Kenya Premier League table they can still win the title this season.

“I was sad to see France knocked out but know I believe that Spain will be the eventual winners of the tournament.

“Their semifinal match against Italy will be a tough one but I believe that they have what it takes to come out on top,” he said.

“Despite Gor being fourth, there is still enough time to turn things around and win a record-extending 20th league title. We won the FKF Cup on Saturday and that’s a sign of good things to come,” he added.

Omiti plans to build a home in the near future and he further explained that he will continue trying to win the Mega Jackpot so he can achieve his dreams.

“I always see people winning the Mega Jackpot and I know my day will come as well. I can make all my dreams come true with such a win,” Omiti concluded.