A SPOT IN THE EURO FINAL UP FOR GRABS AS ITALY TAKE ON SPAIN. PREDICTION 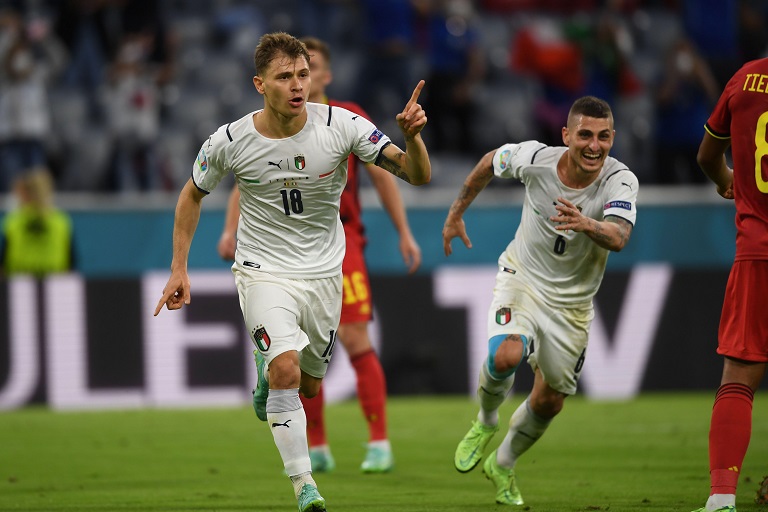 European giants Italy and Spain face off in the first semifinal of the Euro 2020 as they seek to book a place in the Wembley final on July 11.

The Azzurri booked a place in the semi after an enthralling 2-1 win against World Number one Belgium, courtesy of goals from Lorenzo Insigne and Nicolo Barella.

Meanwhile, Spain had to battle to beat 10-man Switzerland 3-1 on post-match penalties after a 1-1 draw in normal time.

The Italians have emerged victorious from each of their last 13 matches and their last defeat came as far back as September 2018, against Portugal.

Each time Spain have won their quarterfinal encounters, they have progressed to win the trophy and all eyes will be on Luis Enrique’s charges.

The 2010 world champions have not been back to a major tournament semi-final since their 2012 victory bookended a four-year spell of global dominance.

What time does Italy vs Spain start?

The game kicks off at 10pm Kenyan time at Wembley.

Roma wing-back Leonardo Spinazzola suffered a dramatic tournament-ending injury against Belgium and he should be replaced by Emerson Palmieri.

Marco Veratti has also recovered from an injury and is line to start in the midfield alongside Nicolo Barella and Jorginho.

Ciro Immobile has not been as prolific as most expected but he will retain his starting place ahead of Andrea Belotti.

Pablo Sarabia is unlikely to be fit to start on Tuesday after suffering a muscular injury against Switzerland and will be replaced by Dani Olmo.

Ferran Torres has had an impressive campaign so far and is set to start alongside Alvaro Morata in the attacking third for the Spanish.

Italy vs Spain head to head

Spain have been victorious on six occasions out of the 13 matches played between these two heavyweights.

Italy have won 2 games with the remaining 5 resulting in draws.

Italy are on a 15-match winning streak heading into this match, whilst Spain are also unbeaten in their last 10 matches but have drawn three in their last 5.

This game has the billing to be a cracker of an encounter with both teams expected to get their name on the scoresheet.

It is likely that this game could be decided after the 90.

One thought on “A SPOT IN THE EURO FINAL UP FOR GRABS AS ITALY TAKE ON SPAIN. PREDICTION”