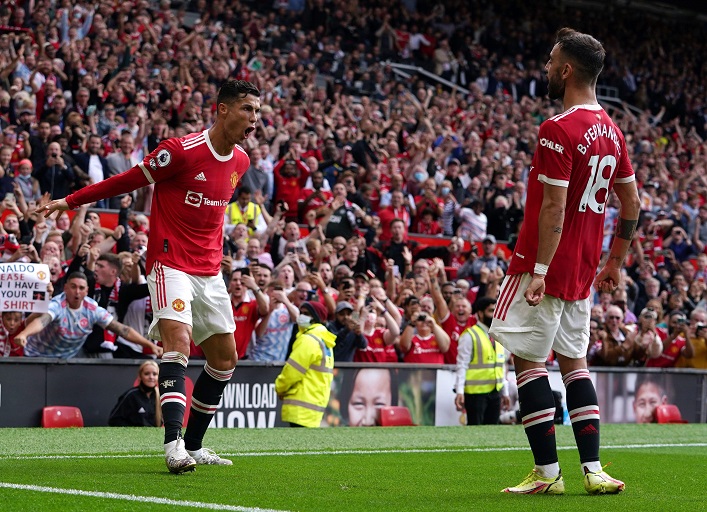 Manchester United’s intent to challenge for the elusive English Premier League title was made clear as they took charge of the table after a comfortable 4-1 win against Newcastle United.

Chelsea and Liverpool remain hot on their heels in second and third respectively after they registered identical 3-0 wins at the weekend.

In a weekend where only 19 goals were scored, there was plenty of action that also saw Arsenal score their first goal of the season in a 1-0 win against Norwich City.

Only one game remains as Everton prepare to take on Burnley at Goodison Park on Monday night.

Here we have a look at the top five things we learned from the weekend.

RE-UNITED RONALDO BACK AT IT

At a capacity Old Trafford, 18 years after Cristiano Ronaldo made his first debut for the Red Devils, the expectation filled the air and as always, he lived up to it.

The 36-year old scored a brace to inspire his team to victory and showed how even just his presence is enough to get Man United going.

Bruno Fernandes and Jesse Lingard made the scoreline more comfortable for the hosts, but it was all about one man as Ronaldo marked his return to English football with three points.

Sir Alex Ferguson, who is credited for moulding Ronaldo into a star, watched on as the Portuguese star made his intentions to win trophies very clear.

After his move back to Stamford Bridge following a successful stint at Inter Milan, there was plenty of whispers about Romelu Lukaku’s ability to prove himself.

Well, the doubters have surely been silenced as the Belgian has shaken off the curse of the Chelsea number 9 jersey.

He scored a brace to guide Chelsea to a 3-0 home victory against Aston Villa to take his tally to 3 goals in 3 games, and his performance shows there is still plenty to come.

TOTTENHAM BACK TO DEFAULT SETTINGS

After a more than impressive start to the new English Premier League season, Spurs were humiliated 3-0 by Crystal Palace on Saturday afternoon.

Granted that they were reduced to 10 men after Japhet Tanganga was sent off for a second bookable offence just before the hour mark, they were far from convincing.

Without star Son Heung-Min and a lackluster Harry Kane, Nuno Espirito’s charges only had two shots on goal, compared to Palace’s 18 attempts.

The defeat saw them move from top of the table to sixth place and could go a spot lower depending on Everton’s performance on Monday night.

ARSENAL WIN, BUT IS IT ENOUGH?

After three defeats to get their season started, Arsenal finally won their first game of the campaign.

In the win, they also scored their first and only goal of the new season as Pierre Emerick Aubameyang found the back of the net just after the hour mark.

The Gunners had 30 attempts at the Emirates and could only score one goal against newcomers Norwich City, still begging the question of Mikel Arteta’s future at the club.

The victory only takes them to 16th place, two points above the dreadful relegation zone, meaning they still have plenty of work to do to get their season in order.

Odsonne Edouard had a dream debut for Patrick Vieira’s Crystal Palace, proving his worth moments after coming on for veteran striker Christian Benteke.

Edouard scored his first just 28 seconds after coming off the bench in the 84th minute then netted his second, and Palace’s third, in stoppage time.

The 23-year old’s late double ensured the best was yet to come for Palace, who celebrated their first Premier League win of the Vieira era.

Benteke and Jordan Ayew have struggled to keep up with the pace in recent weeks and the club may have found a new weapon in the summer signing from Celtic.