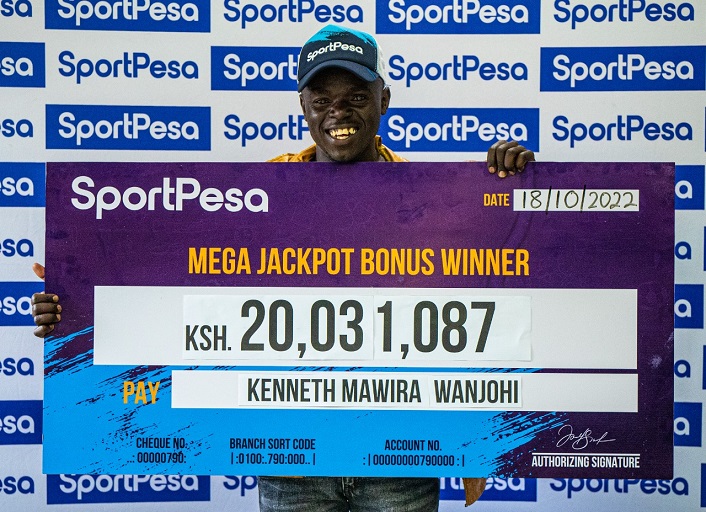 Kenneth Wanjohi is the newest millionaire in town after he came within a whisker of winning the SportPesa Mega Jackpot last weekend but managed 16 correct predictions out of 17 games.

Nevertheless, Wanjohi’s efforts saw him win an astounding bonus of KSHs 20,031,087 that he insisted would go a long way in transforming his life.

The SportPesa Mega Jackpot remains the biggest football pot in the country as it stands at a whopping KSHs 255,480,366 and you could make history by winning it.

“I was home with my family after having supper when I got the congratulations message on my phone following the end of the MJP. I was so excited I did not sleep that night.

“I kept wondering when I can travel to Nairobi to the SportPesa office to confirm my win,” said an elated Wanjohi.

The only game that came in between him and KSHs 252,673,804 was a Belgian league game between Standard Liege and Royal Antwerp.

Wanjohi’s prediction for the game was a draw but it was just not meant to be for him as the drama in the match unfolded from very early.

The home team, Standard Liege, scored 3 goals in 7 minutes to have an unassailable lead by the 9th minute and as fate would have it, the final result was 3-0.

“As I waited for day-break, I decided to withdraw some money from my SportPesa account just to confirm the win.

“I first withdrew KSHs 1,000 and when I saw for real it had been deposited to my MPESA, I went and withdrew another KSHs 20,000. I was so happy to confirm that all this money is true and it is mine,” he added.

Wanjohi, a 25-year old young man from Laikipia, has been playing with SportPesa since 2015 mostly on multi bets but this was only his 5th attempt at the Mega Jackpot.

The staunch Chelsea fan went on to express his happiness after the win and said aside from starting his electrical company, he would build his parents a better place to call home.

The last time someone came close to winning the MJP was in August when Samuel Kiprono Maina from Ndarawetta in Bomet got 16 out of 17 predictions correct to win a bonus of Ksh11 million.

The SportPesa Mega Jackpot continues to grow and just by clicking here and placing a bet worth KSHs 99, you could also make history by becoming a millionaire.