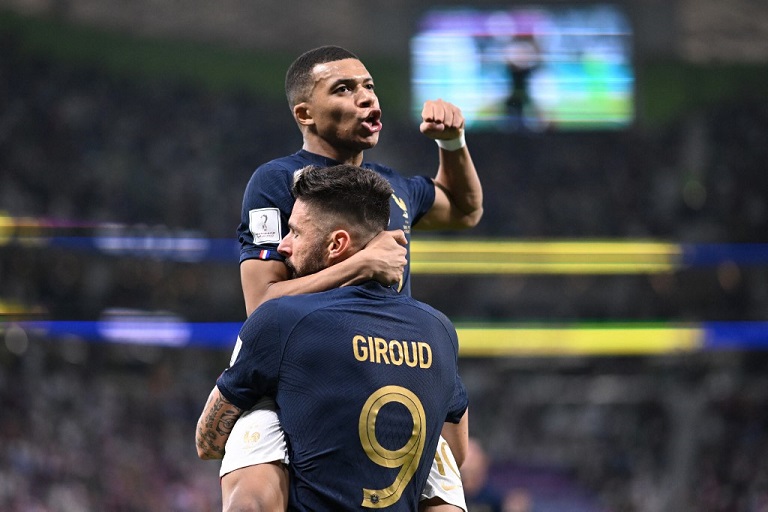 France remain favorites for the World Cup title despite a highly-anticipated quarterfinal clash against England lined up for Saturday evening.

Les Bleus are looking to become just the second team in history to win back-to-back titles after their 2018 triumph.

Kylian Mbappe leads the race for the Golden Boot with 5 goals, including a brace as France swept aside Poland 3-1 in their round of 16 tie.

England topped Group B, ahead of the USA, and punched their ticket to the knockout stages for a last-16 clash with Senegal.

The Three Lions beat Senegal 3-0 to advance to the quarters courtesy of goals from Jordan Henderson, Bukayo Saka and Harry Kane.

Both teams boast a wide array of young talent more than capable of guiding their sides to the semis, with Jude Bellingham being very impressive for England so far.

A victory for either side would see them set up an enticing semifinal clash against Portugal or Morocco who battle it out earlier in the day.

This is arguably the biggest match-up in the last eight and has been deemed worthy of the World Cup final itself but there can only be one winner.

Are France good enough to extend England’s long-wait for the only title they won back in 1966? Make your predictions here.

What time does France vs England start?

Mbappe has been by far the standout performer for Didier Deschamps’ side and he will lead the attacking line together with their all-time top goal scorer Olivier Giroud.

Giroud surpassed the previous record held by Thierry Henry with his 52nd goal in the win against Poland.

Antoine Griezmann and Ousmane Dembele will also start to provide and extra attacking threat for the French, with Aurelien Tchouameni set to start as well.

Ben White and Raheem Sterling both left the England camp due to personal reasons and will both be unavailable.

There was concern after midfield engine Declan Rice missed training with illness but he may be ready to start at the weekend.

Jack Grealish and Mason Mount are pushing for starts but may have to settle for a place on the bench as Bellingham, Sancho and Kane lead the attack.

France vs England head to head

From 7 matches played against these two teams, England have only been victorious on one occasion, a 2-0 win in 2015.

Les Bleus have won 4 times, with the remaining 2 resulting in a stalemate.

Both nations have won three of their last five games but France have also lost twice – to Denmark and Tunisia.

England come into the game unbeaten in that run, only sharing the spoils against USA and Germany.

There is undoubtedly enough talent on either side to provide goals and both teams are expected to score.

Though, France are tipped as favorites to win on the night and book a place in the semis.