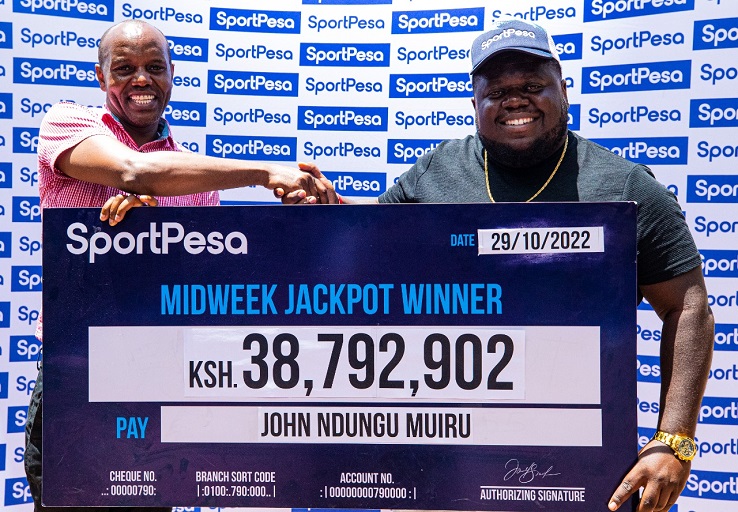 They say when it rains it pours and this was the case in such a positive sense for John Ndung’u Muiru who became the latest winner of the SportPesa Midweek Jackpot.

Muiru correctly predicted all 13 games in the midweek pot and his efforts saw him win a handsome KSHs 38,792,902.

As if this was not enough, he also landed an enviable job as he was confirmed as Nyandarua County Physical Planning and Urbanization County Executive Committee (CEC) member following successful vetting.

“All this is because of God. I have not been in employment since my retrenchment when Covid-19 struck.

“Life has been hard since then but today I am really really happy. In the last two weeks good things have been happening in my life and it is like a dream,” said an elated Muiru.

Muiru has been an avid gamer with SportPesa for years and is a football fan, who is hoping that the situation in football in the country can be attended to, so some normalcy can resume.

Arsenal’s loss to Dutch side PSV Eindhoven in the Europa League plus Real Madrid’s shock Champions League defeat away to RB Leipzig were in the jackpot.

“I’m surprised by the win because you need a little bit of luck to win a Jackpot.

“But the county job is all about hard work and having the best resume. So I was not surprised that I was appointed,” the father of two stated.

“I am very grateful to SportPesa for putting a smile on my face and that of my family, this will definitely change the projection of our lives,” he added.

In the Kenya Premier League, Muiru supports record winners Gor Mahia and across the borders he is a staunch supporter of Pep Guardiola’s Manchester City.

With this being a World Cup year, he strongly believes that his nation of choice, Brazil will carry the day to claim their record-extending sixth title and a first since 2002.

“I plan to invest most of these proceeds in real estate. I am a believer in charity and will look to help out pay school fees for needy students,” the noble Muiru stated.

“I also urge all players to always do it wisely, at the end of the day it should be fun and not interfere with our daily lives. Once in a while like me, you can be lucky and win a life-changing amount of money,” he concluded.