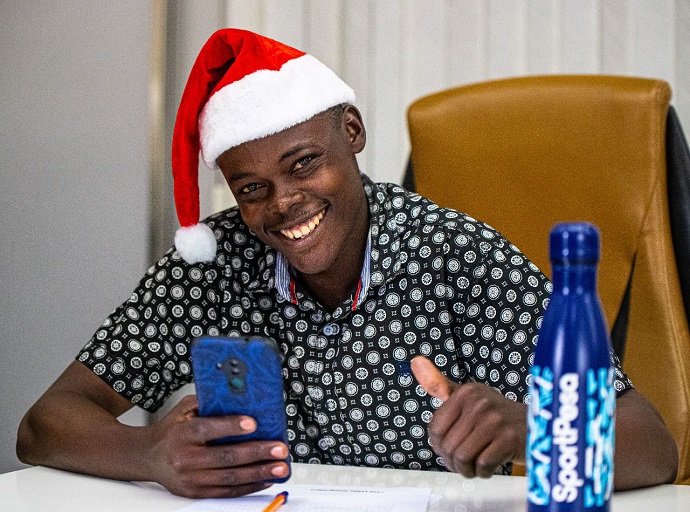 The Christmas bells are ringing and the message they are bringing for Kelvin Makokha is that he is the newest millionaire in town courtesy of the SportPesa Midweek Jackpot.

The Kamiti-based mason correctly predicted the outcome of all 13 games in the pot to win a handsome KSHs 15,003,352 to usher in the festive season in style.

Everything changed for Makokha as the congratulatory message from SportPesa lit up his phone at 12:13am, throwing him into total shock.

He becomes the sixth winner of the SportPesa Midweek Jackpot this year and the progressive jackpot now resets to KSHs 10 million and it only costs KSHs 99 to place your bet slip.

John Ndung’u Muiru was the most recent winner of the Midweek Jackpot and his efforts saw him win a mouthwatering KSHs 38,792,902.

“There is nothing as real as SportPesa to be honest. The money was in my account as soon as the last game was resulted and now my whole life has changed.

“I have always been an avid gamer with them and one time Manchester United kept me out of a Mega Jackpot bonus but I never stopped trying. Thank God I didn’t,” Makokha told SportPesa’s Blog.

Makokha is a father of one who resides in Kasarani and he has big plans that begin with buying a piece of land where he plans to to build a home for his family.

With the remaining cash, he has his sights set on exploring and investing in a sustainable business venture that will ensure his family have steady income for the rest of their lives.

“The secret lies in analyzing the matches. It needs time and patience. Many people use guesswork but analyzing matches makes you understand the teams and the chances they have,” he added.

Speaking of analyzing games, the final match in the Midweek Jackpot was the enthralling World Cup quarterfinal clash pitting Argentina and Netherlands.

Makokha recalls how this game almost gave him a heart attack due to the haphazard way that the game went throughout the duration of the 90 minutes.

He had predicted the game would end in a draw and Lionel Messi’s 73rd minute penalty gave Argentina a 2-0 lead, making it seem as though his bet slip was all but done for.

As fate would have it, the beautiful game took a turn as Wout Weghorst was introduced as a 78th minute substitute and scored a brace, including a 101st minute equalizer to send the game into extra time.

“That game was actually crazy, that’s why I always say you can never know what can happen in a game of football and you can’t ever give up.

“I am so grateful that I have been favored enough to win this life-changing amount of money and I will continue playing with SportPesa. My goal is to win the Mega Jackpot,” Makokha concluded.

This week’s Midweek Jackpot is already out and kicks off on Thursday, December 15 at 11pm. Click here to make your selection and you could be the next millionaire!