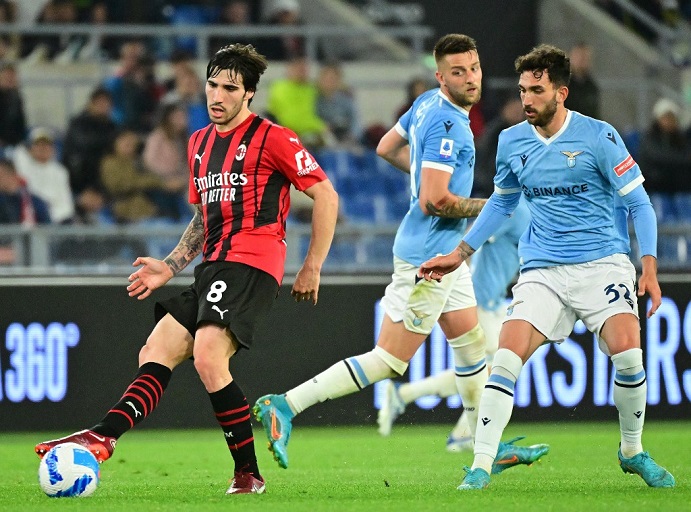 AC Milan are desperate for a win as they travel to Lazio for their midweek Serie A showdown in an attempt to reduce the point gap at the top of the table.

The hosts Lazio can hop into the top 3 with a win here after their last Serie A encounter resulted in a 2-0 away win at Sassuolo.

The victory left them in 6th place with 34 points, four less than Milan who remain in second place on the log.

The visiting Milan are without a win in their last 4 games in all competitions and are fresh off a 3-0 demolition by city rivals Inter in the SuperCoppa Italiana.

Lazio finished fifth in Maurizio Sarri’s first season at the club and will be hoping to go at least one better this time around and qualify for the Champions League.

The Rossoneri were recently knocked out of the Coppa Italia at home to Torino before their defeat to Inter and are desperate to bounce back to winning ways.

They have a double-header against Tottenham in the club’s first Champions League knockout tie for nine years to look forward to next month.

Does Stefano Pioli’s side have what it takes to record an away win here to maintain their second place spot on the Serie A table?

What time does Lazio vs AC Milan start?

The game kicks off at 10:45pm Kenyan time at the Stadio Olimpico.

The hosts continue to battle through without their talisman Ciro Immobile who continues to nurse a thigh injury.

Felipe Andersen will start again in a false 9 role after his 33rd minute strike was enough for Lazio against Bologna last time out.

The rest of the Lazio line-up will remain unchanged.

Ante Rebic and Rade Krunic are hopeful to be named among the substitutes after returning from injury as Olivier Giroud continues to lead the attacking line.

Rafael Leao and Brahim Diaz are both fit and will offer support to the Frenchman in the final third.

From the 59 games played between these two teams, Milan have the advantage after 28 wins, compared to Lazio’s 11.

The remaining 20 have resulted in a stalemate, the last being a barren draw in the 2019 Coppa Italia.

Both sides have lost twice in their recent run of five games but Lazio have won twice as well and shared the spoils in another.

Milan on the other hand have only managed one win in their last 5 games.

Despite having a better record against Lazio in the past, Milan do not look like a side that can get this away win with the run of form they are on.

The home team are tipped as favorites to win.