WIMBLEDON: CAN WORLD NUMBER ONE NOVAK DJOKOVIC MAKE IT 6? 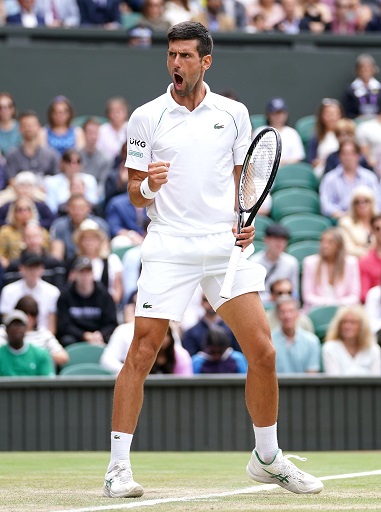 Serbian Novak Djokovic stormed into the semifinals of the ongoing Wimbledon tournament after beating Marton Fucsovics 6-3, 6-4, 6-4 in two hours and 17 minutes.

Djokovic is nearing Roger Federer’s record of 20 Grand Slam titles, after the Swiss was knocked out in the quarters by Hubert Hurkacz.

The fast-rising Polish tennis star beat Federer 6-3, 7-6 (4), 6-0, in just one hour and 49 minutes to set up a semifinal clash against Matteo Berrettini.

The other semi encounter will see Djokovic go up against Denis Shapovalov on Friday.

This will be his tenth semi-final at the All England Club while it is the first time Shapovalov has been in one of the sport’s four biggest tournaments.

Djokovic has dropped just one set in the process of reaching the last four and he goes into the semis as the strong favourite to defend the title he won in 2019.

The Australian and French Open champion has been heavily backed to continue his incredible form this season as he aims to draw level with Federer and Rafael Nadal on 20 Grand Slams.

In the other semi, Belarusian world number four Aryna Sabalenka will play against Karolina Pliskova for a place in the Saturday final.

Who will make it into the finals? Make your predictions here