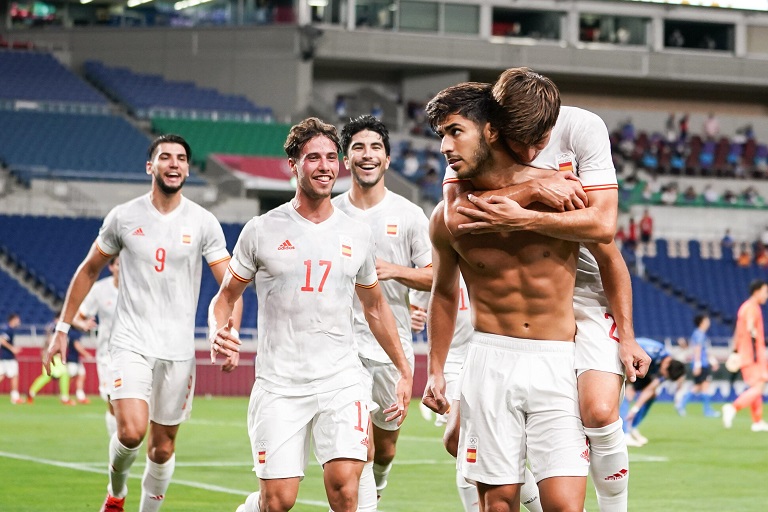 Brazil have the chance to defend their Gold medal when they take on Spain in the final of the men’s football at the ongoing Tokyo 2020 Olympics.

The champions were first to book their spot after a 4-1 victory over Mexico on post-match penalties.

Mexico, the Olympic tournament’s top scorers only troubled Brazil in the final moments of the first half and after missing their first two penalties, there was no hope.

Real Madrid youngster Reinier slotted home his spot-kick to secure the victory and a seventh appearance in the final.

Brazil won Gold at home in the 2016 Olympics, beating Germany and Nigeria bagged the bronze medal.

Spain on the other hand had to wait for a moment of class from Marco Asensio in the 115th minute of the game to beat Japan 1-0.

Neither side could break the deadlock in the 90, forcing extra-time where the individual quality of the Spaniards was enough to eliminate the hosts.

Spain are looking to repeat their gold medal success from the Barcelona Games in 1992.

Who will win Gold? Make your predictions here for a chance to win

What time does Brazil vs Spain start?

The game kicks off at 2:30pm Kenyan time at the International Yokohama Stadium.

Captain Dani Alves has played every single minute of Brazil’s Olympic campaign and will be key in solidifying their defense in the final.

The maturity and threat of Richarlison up front is key in their quest to retain the Gold medal with support from Antony and Claudinho.

After his exploits in the semi, Reinier could be handed a rare start.

As for Spain, it is highly unlikely that they will make any changes to the team that started against Japan.

The attack will be led by Real Sociedad star Mikel Oyarzabal, Marco Asensio and Pedri.

Neither of these two sides have tasted defeat in their last five matches.

Brazil have a slight advantage after winning four and the remaining fixture resulting in a stalemate, a barren draw against Ivory Coast.

Spain have won three times and settled for draws against Argentina and Egypt.

It’s unlikely that this will be a high-scoring encounter and could even be settled after 90 minutes. Both teams have immense individual quality and a draw could be the most likely outcome.