WILL MANCHESTER BE RED OR BLUE AFTER UNITED HOST CITY IN HOT DERBY? PREDICTION 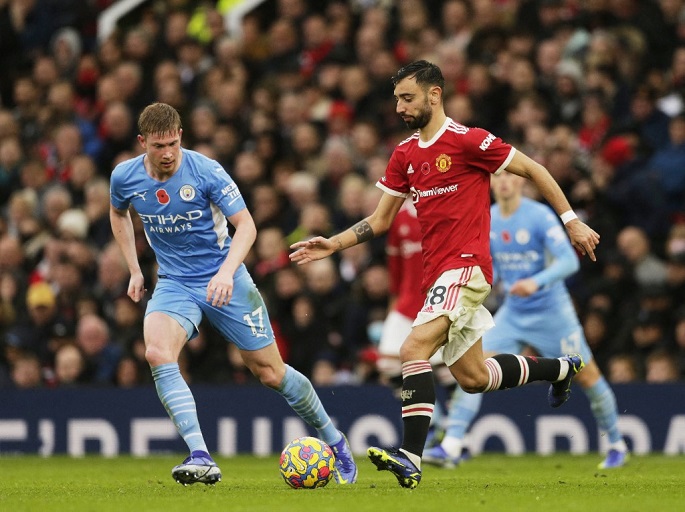 Manchester United are out to make it 7 consecutive wins in all competitions when they host neighbors Man City on Saturday afternoon.

The first Manchester Derby of the season will curtain raise Saturday’s fixtures as the hosts look to hop into the EPL top 3.

The Red Devils are currently in fourth place with 35 points, four behind their city rivals who are in second place.

Man United are seeking revenge after City thrashed them 6-3 the last time they met in the league and a win will really boost their confidence.

United have not dropped points since they suffered back to back friendly defeats to Cadiz and Real Betis.

Man City on the other hand are looking to return to winning ways after they were stunned 2-0 by Southampton to knock them out of the EFL Cup.

That defeat was only Pep Guardiola’s second loss in the competition since taking charge of City back in 2016, a remarkable feat.

Erik Ten Hag has now won 20 of his first 27 competitive matches in charge of the Red Devils to set a new record ahead of this mouthwatering tie.

City are unbeaten in their last three league outings and returned to winning ways with a 1-0 win over Chelsea last Friday.

Man City have kept a clean sheet in five of their last six away matches against Man Utd across all competitions but it will be difficult to keep the hosts out.

Pep’s side could break their own club record for the most goals scored against United in a single campaign (8 goals in 1954-55) if they score at least 3 times here.

Who will have bragging rights in Manchester after this derby on Saturday? Click here to place your bet for this encounter.

The game kicks off at 3:30pm Kenyan time at Old Trafford.

Diogo Dalot is being assessed for a return to the starting XI in a familiar back four of Raphael Varane, Lisandro Martinez and Luke Shaw.

Bruno Fernandes returns after serving a one-game suspension and will start alongside Christian Eriksen and Casemiro in midfield.

Up front, United are lucky to have an in form Marcus Rashford back to his old self and he will lead the attacking line.

Brazilian Antony and Anthony Martial are the other two options expected to feature in the final third.

For the visitors, they are hoping that Erling Braut Haaland can continue his goal-scoring exploits and bag his 22nd league goal of the season.

Kevin De Bruyne and Bernardo Silva will need to rediscover their top form as they start as well.

In the final third, Riyad Mahrez is likely to get a place in the starting XI after a string of good performances and 2 goals in the last 3 outings.

The two rivals have crossed paths 188 times in all competitions since their first-ever meeting in a non-competitive game in 1881.

The hosts have historically been the better side in these games and enjoy a 77-58 lead in wins, while as many as 53 matches have ended in draws.

Both teams come into the game unbeaten in their last 5 matches.

The home team have won all of those 5 games, while City dropped points in a 1-1 draw against Everton.

There have been over 1.5 goals in the last 5 derbies and this is expected to produce a similar result. Both teams are on a great run of form and goals is the most certain bet in this game.