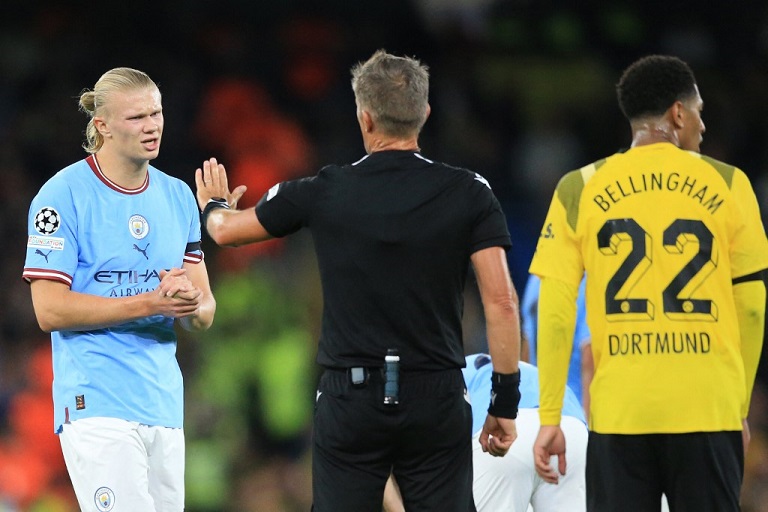 Manchester City will confirm that they will win Group G in the UEFA Champions League if they avoid defeat at Borussia Dortmund.

Pep Guardiola’s side are top with 10 points, 3 more than Dortmund in second.

Man City were 2-1 winners in the first leg back in September at the Etihad, courtesy of goals from John Stones and Erling Haaland.

Dortmund’s only victory against Manchester City in the UEFA Champions League came by a 1-0 margin in the group stage of the 2012-13 campaign.

Dortmund should head into the game filled with confidence after thrashing Stuttgart 5-0 in the Bundesliga on Saturday.

City on the other hand were 3-1 winners against Brighton and Hove Albion over the weekend.

Man City are one of only two teams that are yet to concede a goal from open play in the UEFA Champions League so far this season.

Can Dortmund string together an infamous victory against the English giants on Tuesday?

What time does Dortmund vs Man City start?

The game kicks off at 10pm Kenyan time at the Signal Iduna Park.

Though the hosts are boosted by the return of captain Marco Reus and Donyel Mallen.

Youngsters Youssouf Moukoko and Jude Bellingham have been in top form and are both expected to start.

For the visitors, Haaland will lead the attacking line against his former employers, supported by Phil Foden and Bernardo Silva.

Ilkay Gundogan is also tipped to start against his former club, alongside Kevin De Bruyne in midfield.

Both sides have won 3 times against each other in 8 competitive matches, with another 2 games resulting in a stalemate.

City have lost once in their last 5 matches, a 1-0 defeat to Liverpool, but have won 3 times and drawn once.

While Dortmund’s 1-0 defeat to Union Berlin is also their only loss in a similar number of games.

Goals are expected from both sides in this encounter, with a draw being the most likely outcome.