WILL IT BE BACK TO BACK TITLES FOR FRANCE OR WILL ARGENTINA RISE TO THE TASK? PREDICTION 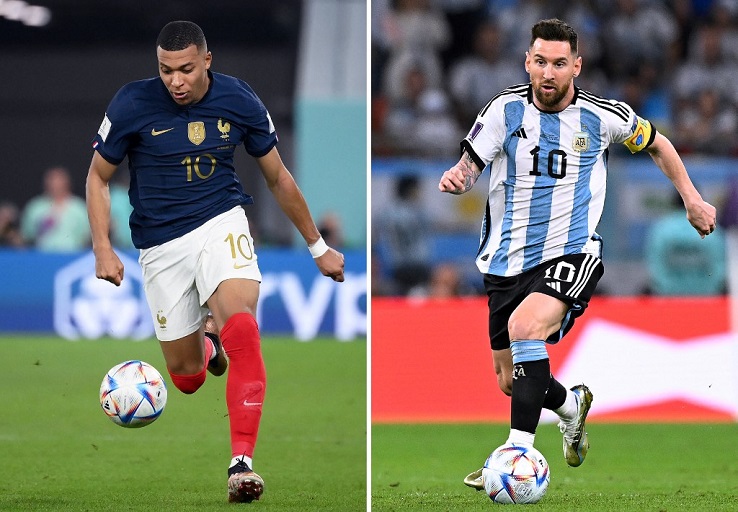 The time for the FIFA World Cup final is upon us as France hope to make it back to back titles but Argentina are looking to get their own slice of the cake.

France won the 2018 edition of the tournament in Russia after they cruised to a 4-2 victory over Croatia in the final.

Les Bleus are back in the final four years later and this time it’s Lionel Messi’s Argentina that are standing in their way in what promises to be an explosive encounter.

Didier Deschamp’s side are looking to become only the third team in history to win the World Cup twice in a row after Brazil and Italy.

Their place in the highly anticipated final showdown was guaranteed after a solid 2-0 win against surprise package Morocco in the semis.

Meanwhile, Argentina booked their ticket to the final with an impressive 3-0 demolition of Croatia, to give them the chance to win their first title since 1986.

This will be Messi’s last chance to further cement his status among the best players in the history of the beautiful game if he can guide his team to victory.

There is also another battle on the cards for him as he chases the Golden Boot Award, where he is tied with Kylian Mbappe with 5 goals a-piece.

Not since the 1978 group stage have the 1998 and 2018 winners suffered defeat of any kind to a South American nation in the globe’s premier competition.

Despite a host of injuries coming into the tournament with Ballon d’Or winner Karim Benzema, Ngolo Kante and Paul Pogba ruled out, France are still hot favorites.

Argentina and France have played three times previously at the FIFA World Cup. Argentina won the first two meetings in 1930 and 1978, while France knocked Argentina out of the 2018 World Cup in the Round of 16.

Can Lionel Messi cap off an exemplary career with a victory in the biggest game on the football stage or will Mbappe make it back to back titles?

Click here to play and make your predictions for the final masterpiece.

What time does France vs Argentina start?

The game kicks off at 6pm Kenyan time at the Lusail Stadium.

There is lots of speculation surrounding whether Karim Benzema is fit enough to make a cameo appearance on Sunday but we don’t know yet.

In case he doesn’t, then Kylian Mbappe remains the focal point of the French attack, supported by Ousmane Dembele and Olivier Giroud.

Antoine Griezmann has been impressive throughout the tournament and will retain his starting role with Aurelien Tchouameni the center of midfield.

The rest of the team will remain unchanged.

Argentina’s attack will be led by Messi with Man City’s Julian Alvarez as the striker, following his 3 goals in the tournament already.

Paulo Dybala is pushing for a place in the starting XI after being used as a substitute often but may once again feature from the bench.

But Lionel Scaloni is not expected to make any changes from the side that beat Croatia in the semis.

France vs Argentina head to head

The South Americans have the advantage, winning two of the three games they have played against France, who’s one win came in the 4-3 triumph in Russia four years ago.

There has never been a draw between these nations.

Les Bleus have lost once in their last 5 games, a 1-0 defeat to Tunisia in their final group game, but have won all the remaining four games.

Meanwhile Argentina have won all their last 5 games, despite having to beat Netherlands on penalties in the round of 16.

There is no doubt that both teams will score in this game. Despite Argentina being strong on paper as well, France are tipped as favorites to win a second straight title.