WILL ARSENAL DO THE DOUBLE OVER PSV TO BE CONFIRMED GROUP A WINNERS? PREDICTION 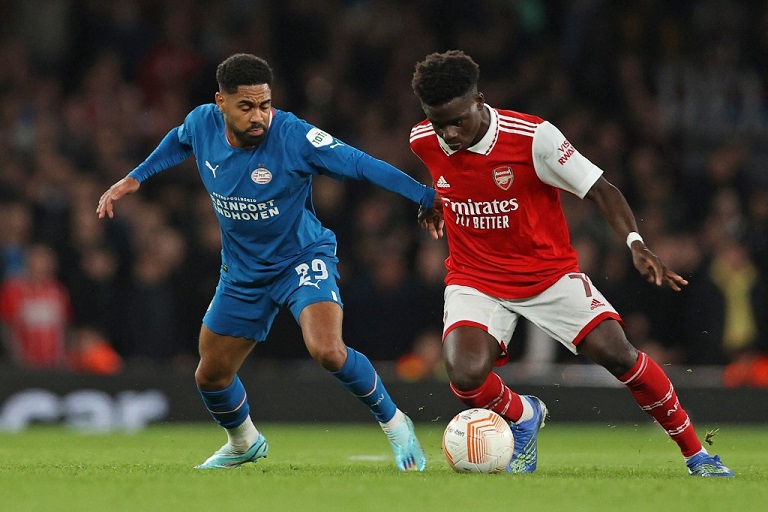 Arsenal travel to PSV for the second leg of their Europa League Group A knowing that a draw will confirm them as Group winners.

The Gunners recorded a slim 1-0 victory in the first leg at the Emirates Stadium last week, courtesy of a Granit Xhaka goal.

PSV Eindhoven registered only four shots against Arsenal in the reverse fixture – their fewest in all competitions since November 2016.

Mikel Arteta’s side are atop the standings with 12 points, 5 more than PSV in second place.

A place in the knockout round playoffs should now be the goal for Van Nistelrooy’s side, who could guarantee a second-placed finish with a point.

The Dutch giants have scored in each of their last 10 Europa League matches at home.

Can PSV keep their good home record against Arsenal alive and bag all 3 points on Thursday night?

What time does PSV vs Arsenal start?

The game kicks off at 7:45pm Kenyan time at the Philips Stadion.

Luuk De Jong, Noni Madueke and Mauro Junior have all been declared fit for the match.

Erick Gutierrez and Phillipp Mwene are both in line to return to the starting XI, with Anwar El Ghazi being relegated to the bench.

Guus Til and Cody Gakpo will be in charge of leading the hosts attacking line.

As for the visitors, Oleksandr Zinchenko is still not match fit thus Kieran Tierney will earn a call up to start on the night.

Gabriel Martinelli and Bukayo Saka will retain their starting roles with Eddie Nketiah expected to lead the attack.

PSV vs Arsenal head to head

There have been 7 matches played between these two teams with Arsenal winning 3 times, compared to PSV’s solitary victory.

The remaining 3 have resulted in a stalemate.

The home team have lost their last 2 games, snapping a three-game winning streak, while Arsenal are unbeaten in their last 5 games – dropping points just once.

The Gunners poor record on Dutch soil is set to continue with a draw the most likely outcome.