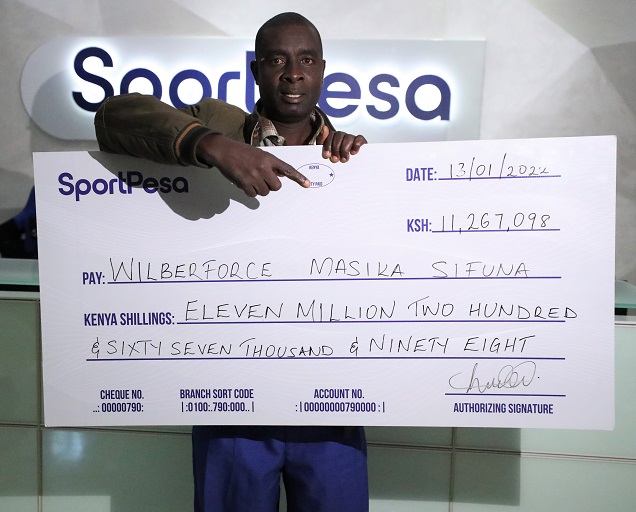 There is absolutely no better way to start off your year than becoming the newest millionaire in the country and this is how Wilberforce Masika Sifuna began his 2022.

Courtesy of leading gaming platform SportPesa, Sifuna is now KSHs 11,267,098 richer after being rewarded with a Mega Jackpot Bonus, after correctly predicting 16 out of the 17 games in the pile.

“This is actually unreal, I know many people usually don’t believe that this happens and I can confess that I used to be one of them.

“Now I have seen that SportPesa’s jackpot is legit and after my bonus win, I do not plan to stop playing with them anytime soon,” Sifuna said as he was presented his winners cheque on Thursday morning.

The 53-year old from Kakamega County does not own a smartphone and usually uses a small booklet he acquires locally to study the games and make his predictions.

He further went on to say that the Mega Jackpot was not hard at all and if he had enough time, he would have put an additional slip, insisting that he would have won the grand prize of KSHs 180,131,275.

Interestingly, Sifuna does not even watch football and is not a fan of any particular team but this does not stop him from attempting to win the colossal football jackpot.

“I actually prefer the SportPesa Midweek Jackpot but I usually try both of them. Now don’t be surprised if you see me again here soon after I win the Mega Jackpot.

“This is one of the easiest jackpots I have ever played and only because of a lack of time I did not add another slip but all in all, I thank God for the win,” he added.

Sifuna, a farmer by profession, maintains that he has no intention to buy a different phone despite the recent fortune and plans to use most of the money to shape a better future for his kids.

He is happily married and has six children, all in Kakamega, except his first born son Renson Masika, who is a lorry driver in Nairobi and accompanied his father on Thursday.

“Can you imagine my father told me to stop gaming. He would find me analyzing games and he sternly warned me against it and now look, he is a millionaire because of it,” Renson stated.

When asked about it, Sifuna laughed it off and said; “Yes, I did tell him to stop because I thought that was all his focus was on. Now he can be happy that I have won and we can enjoy the winnings together.”