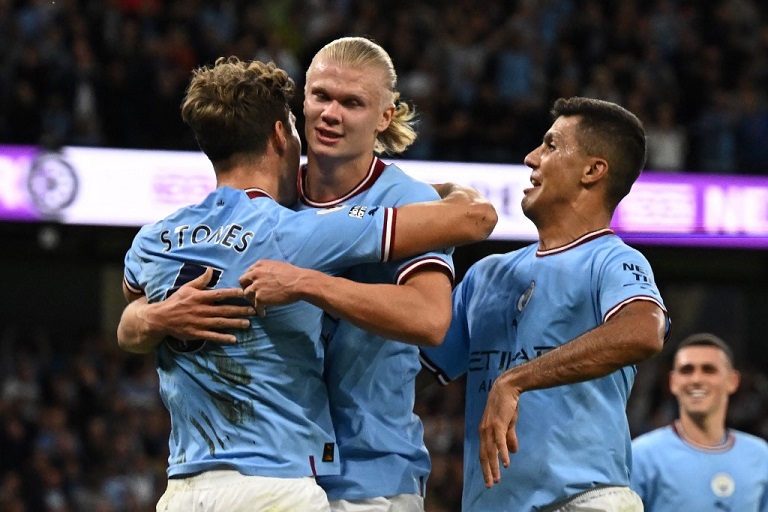 Man City were 3-0 winners against Wolves before the international break and are in 2nd place with 17 points.

While, United have not played a league game since they beat Arsenal 3-1 on September 4, and are in 6th place ahead of this game.

City’s new signing Erling Haaland already has 11 goals this season and has expressed how eager he is to face Man United.

Man City are the Premier League’s leading scorers on home turf this season – banging 14 in just 3 such games and conceding a joint-low (2).

The hosts did the double over United by an aggregate of 6-1 last season – inflicting a heavy 4-1 defeat upon their rivals at the Etihad in March.

No man since Sir Alex Ferguson has been able to steer the Red Devils to victory in their first Manchester derby in charge of the club.

Can Erik Ten Hag change this narrative and guide his side to a rare win?

What time does Man City vs Man United start?

The game kicks off at 4pm Kenyan time at the Etihad Stadium.

John Stones limped off for England against Germany and will sit this one out, though Aymeric Laporte could return from injury.

Kyle Walker is fit again as well so he will occupy the right flank, with Joao Cancelo on the opposite side.

Kevin De Bruyne will engineer the midfield with the trio of Phil Foden, Jack Grealish and Haaland playing up front.

For the visitors, Anthony Martial and Marcus Rashford may both be fit to return to the squad for the clash.

Raphael Varane and Lisandro Martinez are expected to pair up at the back in expense of troubled Harry Maguire.

It will be interesting to see whether Cristiano Ronaldo will get a place in the starting XI.

United have the advantage after winning 24 times from the 53 games played between these two sides, compared to City’s 21 wins.

Only 8 have resulted in a stalemate, the last being a barren draw in December 2020.

The home team come into the game unbeaten in their last 5 games, winning 4 times. United have also won 4 in that run, losing one as well.

Though it is expected to be an entertaining game of football, Pep Guardiola’s side are expected to bag all three points on the day.