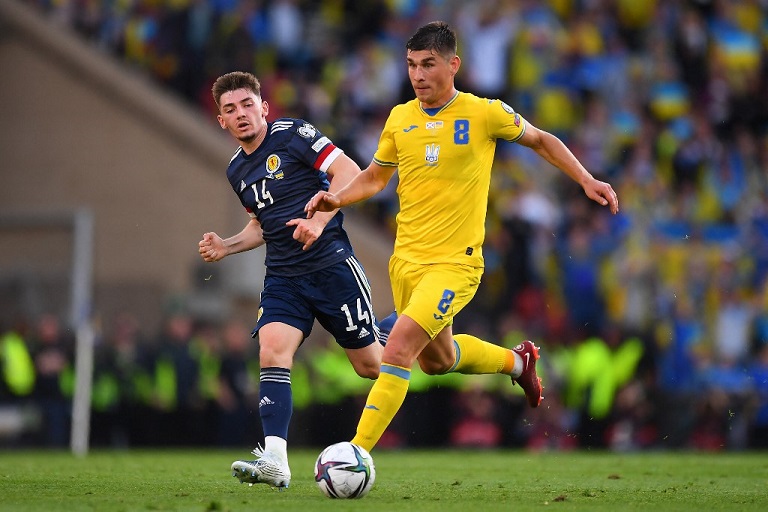 As top leagues go into the international break, Ukraine travel to Scotland for their UEFA Nations League clash.

Ukraine come into the game unbeaten in League B: Group 1 and are sitting pretty at the top with 7 points after 3 games.

Meanwhile, Scotland are in 2nd place with 6 points after losing 3-1 to Ukraine in the reverse fixture in June.

They both ultimately missed out on a place at Qatar 2022, but occupy the top two spots in League B Group 1 with a game in hand on the other two nations.

Since ending 2021 with six wins in succession, Scotland have won only two of their subsequent six outings – both against minnows Armenia.

Can Ukraine continue their unbeaten run in the Nations League? Make your predictions here.

What time does Scotland vs Ukraine start?

The game kicks off at 9:45pm Kenyan time at Hampden Park.

Captain Andy Robertson will miss out through injury for each of their three games this month, but Arsenal’s Kieran Tierney is back.

Despite a lack of playing time this term, Billy Gilmour, Jack Hendry and Anthony Ralston are all set to feature.

Newcastle winger Ryan Fraser was also called up and could come in off the bench as Che Adams leads the attack.

For the visitors, Arsenal’s Oleksandr Zinchenko recently sustained a calf injury in training and may not return to action until next month.

Andriy Yarmolenko is fit and his experience will be key in maintaining their unbeaten record.

Scotland vs Ukraine head to head

There has never been a stalemate between these two sides from the 3 matches they have played.

The Scots have won once, with Ukraine winning the other two.

The hosts have won and lost twice in their last 5 games, while Ukraine have lost just once and won three times in that run.

On their quest for revenge, Scotland will give a good account of themselves and could win narrowly on the night.