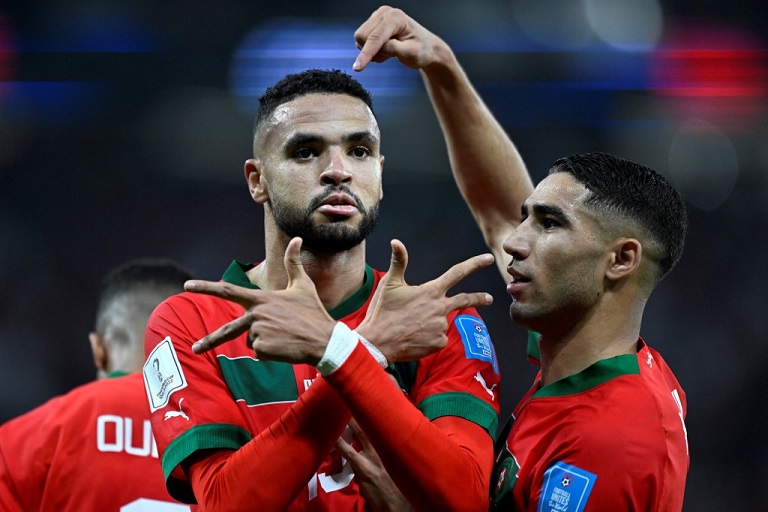 Morocco became the first African team to reach the semifinals of a World Cup and now are all set for a titanic clash against champions France.

The Atlas Lions have beaten all odds to make it to the last four after knocking out 2010 winners Spain before beating Portugal 1-0 in the quarters.

Sevilla striker Youssef En-Nesyri scored the lone goal of the game just before half time and they continued their defensive prowess to send Cristiano Ronaldo’s side home.

They have the best defensive record at the World Cup, only conceding one goal in the competition and now have the hopes of an entire continent lying on them.

France on the other hand beat Poland 3-1 in the round of 16 before sending England home in the quarters after a 2-1 victory.

Didier Deschamps side are looking to become only the third team in history to win back to back World Cup titles after Brazil and Italy.

Les Blues are without a clean sheet in their last six games across all competitions but have scored 11 goals, the third-highest tally in the tournament.

Though, it has been 84 years since a European nation managed to reach the World Cup final as reigning champions and France are out to break this duck.

If Morocco can cause yet another upset and qualify for Sunday’s final, it will indeed be the hero story of the 2022 edition of the tournament.

Will the dream continue for the North Africans or are France well equipped to continue their history-chasing quest with yet another final appearance?

Click here to make your predictions for the mouthwatering encounter.

What time does France vs Morocco start?

Despite conceding a late penalty against England, Theo Hernandez will retain his spot in the lineup as his brother Lucas remains sidelined with injury.

Aurelien Tchouameni scored a beauty in the quarters and will start in midfield alongside Adrien Rabiot.

Kylian Mbappe remains the top scorer in the tournament with 5 goals and will start, supported by Ousmane Dembele and Antoine Griezmann.

Olivier Giroud is looking to make more history by becoming the oldest player to score 5 World Cup goals and will be part of the starting XI.

Morocco striker Walid Cheddira received two yellow cards in quick succession against Portugal and will be suspended for the semi-final.

Hakim Ziyech and captain Romain Saiss are both expected to be fit to start despite minor injury concerns as the team remains unchanged.

France vs Morocco head to head

There have been 11 meetings between the two nations. France have won seven of those games while Morocco have won just once.

There have been three draws between the two sides, including their most recent matchup which ended 2-2.

Both teams have won 4 games from their last 5, an impressive run of form that sets this up to be a hotly-contested affair.

Though, the world champions lost once, a 1-0 defeat to Tunisia while the Moroccans barren draw with Croatia being the only time they have dropped points.

France are not lacking a goal-scoring threat but they are going up against the meanest defense in the tournament.

Both teams are expected to score and despite their tireless nature, the quality in the French side should be enough to win on the night.