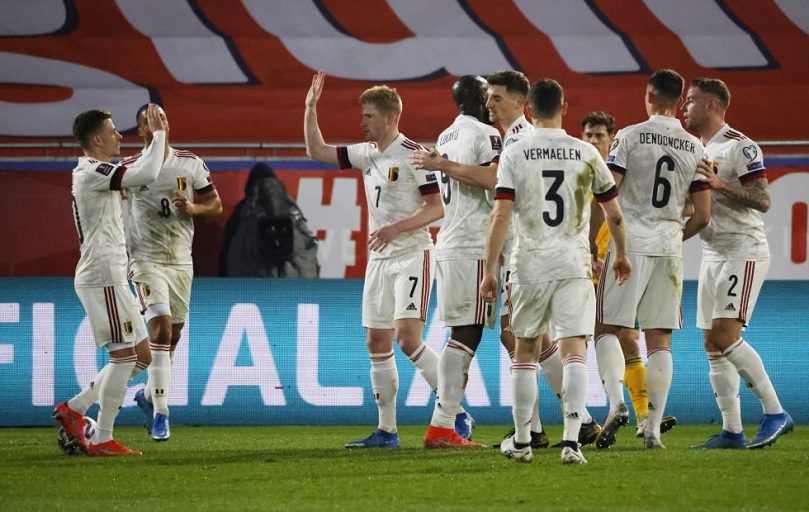 This Saturday night encounter comes three days after both sides registered opening victories in the first round of fixtures in the 2022 FIFA World Cup qualifiers.

Czech Republic are on top of the table because of a better goal difference than the top ranked team in the world after destroying Estonia 6-2, whilst Belgium saw off Wales 3-1 on Wednesday night.

Czech Republic will be present at this summer’s European Championships, having finished second behind England in their qualification group, and they actually beat the Three Lions at home in October 2019.

They have not actually qualified for a World Cup since 2006, when they went out in the group stages, winning just one of their three matches against Italy, Ghana and the United States.

Both sides are looking to make it back to back wins in the qualification but did not qualify for either the 2006 or 2010 World Cup, but they made the quarter-finals of the 2014 competition before claiming third in 2018.

Belgium reached the quarter-finals of Euro 2016 and comfortably qualified for this summer’s tournament, winning all 10 of their matches to finish top of Group I ahead of Russia.

What time does Czech vs Belgium start?

The game kicks off at 10:45pm at the Sinopo Stadium.

Tomas Pekhart and Matej Vydra will be pushing for starts but the same Czech side is available for the game, having not picked up any injuries in the win over Estonia.

Patrick Schick, who scored in the last game, should also start as well as Thomas Soucek, who scored a hat-trick in the Estonia game will be the star of the Czech attack.

For the visitors, Roberto Martinez will be inclined to switch up his line-up but could retain the same starting XI with Thomas Denayer being the only switch replacing Thomas Vermaelen.

Leandro Trossard, who has been enjoying a great season with Brighton and Hove Albion FC, came off the bench in the last game and could feature for the Belgians.

Czech vs Belgium head to head

Only one match out of the six played between these two sides has ended in a draw, with the hosts winning twice compared to Belgium’s three victories.

The last time these sides went head to head in 2017, Belgium came out 2-1 winners.

Belgium have not lost in six matches, winning all five of their latest encounters whilst Czech Republic have lost twice out of 5, but are currently on a three-match winning streak.

Both sides will definitely get their names on the scoresheet with the quality they boast, though a draw could be the most likely outcome.