HERE ARE THE TOP 5 SURPRISE YOUNG TALENTS AT THE EUROS. 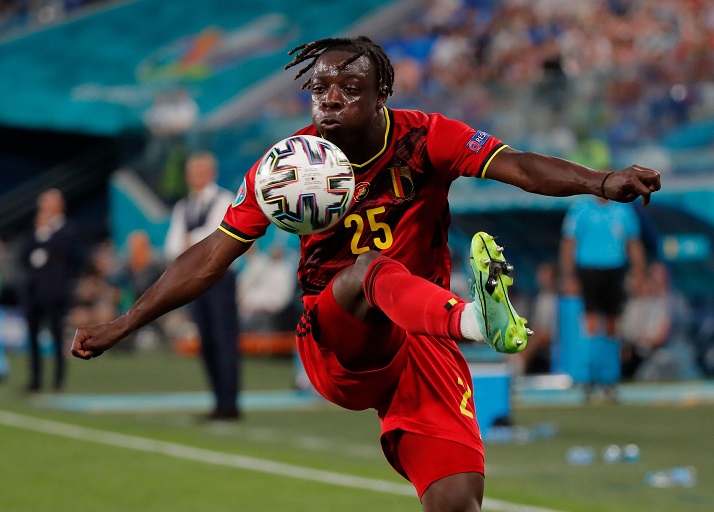 With the European competition heading into the semifinal stage, the only surprise team in the last four has to be Denmark.

Italy take on Spain in the first semi on Tuesday night, then the Three Lions of England battle it out with Denmark on Wednesday.

With the likes of seasoned veterans such as Cristiano Ronaldo, Luka Modric, Toni Kroos and others seemingly on their way out, there have been various surprise talents at the tournament.

Here, SportPesa Kenya’s blog has a look at some of the young talents that have impressed on the continental stage thus far.

The 19-year old wonder kid has been sensational in the tournament and caught many by surprise at the Euros.

The explosive Ligue 1 winger cemented his place in the Belgian starting line-up and contributed to three goals in the tournament, proving to be a handful for the opposition.

Doku’s stellar performance against Italy, winning a penalty and successfully completing 8 dribbles has put him on Bayern Munich and Liverpool’s radar.

The Inter Milan midfielder is another player who has made his name known at the Euros with exemplary performances against Belgium, Austria and Switzerland.

Barella’s opener in the 2-1 win against Belgium meant that Italy have now scored more goals in this European Championships than they ever have in the past (10).

His midfield prowess has been key in enabling Italy to stretch their unbeaten run to 30 games.

Denmark got their tournament off to a torrid start, losing twice to Finland and Belgium, as well as losing star Christian Eriksen after he suffered a cardiac arrest in their opening game.

Kasper Dolberg is one of the main reasons that they have been able to turn their fortunes around and make it into the semis.

The Nice forward has scored three goals in the tournament, including a brace in the 4-0 demolition of Wales in the round of 16.

The Manchester City winger has proven to be key for Luis Enrique’s title charge and at only 21 years of age, the future is looking bright for the youngster.

Torres has scored two goals against Croatia and Slovakia, as well as providing an assist, helping Spain into their first semi-final appearance since winning the 2010 World Cup.

He has shown insurmountable composure and all eyes will be on him in the semi against giants Italy.

After an impressive campaign in the Serie A with Atalanta, Maehle has brought his explosive capabilities to the Euros.

The full-back has been instrumental in Denmark’s route to the semis, scoring two important goals and setting up another.

There is still so much to come from Maehle and the England team should definitely be wary of his attacking prowess ahead of their semifinal encounter.

2 thought on “HERE ARE THE TOP 5 SURPRISE YOUNG TALENTS AT THE EUROS.”