TOP 5 AFRICAN FOOTBALLERS OF ALL TIME! 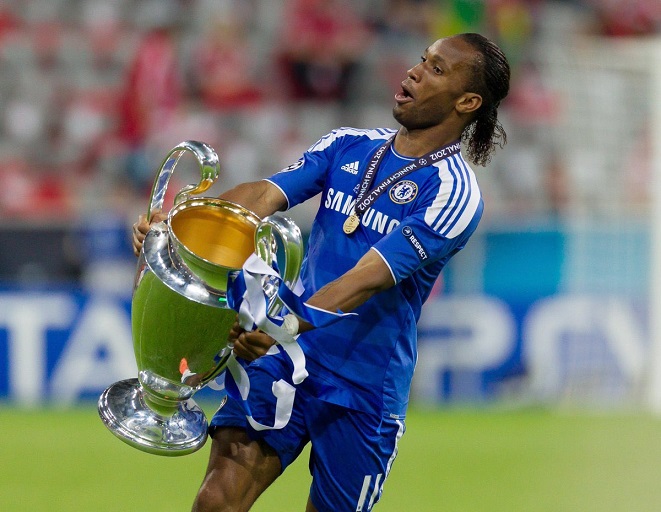 The only thing that African football is lacking to date is a FIFA World Cup trophy but aside from that, the heaps of talent birthed from the Motherland is undeniably significant.

Undoubtedly, the coveted world cup will definitely come to Africa and the tournament hosted in South African in 2010 was the first ever and a sign of better things to come.

Many have different views on who actually is the best player to ever hail from Africa with factors such as trophies won at club level, leagues played in and length of their careers all playing an integral part in the selection.

Here, SportPesa Kenya’s blog chooses the best 5 African players and if you do not agree, I challenge you to make your own list to diffuse this particular one.

When it comes to the most lethal strikers to ever grace the English Premier League, the name Didier Drogba definitely is among the top names on that list.

His strength, agility, finishing prowess, hold-up play capabilities and leadership on the pitch was unquestionable as many fondly remember him for his glory days at Chelsea FC.

Drogba scored over 100 goals during his 8-year stint with the English club and the most important being the equalizer followed by the winning penalty against Bayern Munich in the 2012 UEFA Champions League Final.

He was also named African Player of the Year twice, in 2006 and 2009 as well as being Ivory Coast’s all-time top goalscorer with 65 goals from 105 appearances.

The now retired Eto’o has been referred to as one of the best strikers in the world by pundits, coaches as well as his teammates from all over the world.

He played for over 15 clubs overseas and won numerous titles which include 3 UEFA Champions League medals, two with Barcelona and one with Inter Milan, where he became just the second player in history to score in two Champions League finals.

He won Olympic Gold in 2000 before helping Cameroon seal the AFCON title on two other occasions, scoring 56 goals in 118 appearances for his country.

As if all that is not enough, Eto’o has won the African Player of the Year award a record five times!

Keita is the most decorated footballer from Africa at club level, winning 14 trophies during his time at Barcelona aside from the titles he won at Lorient and Sevilla.

The versatile midfielder held a constant starting position in a Pep Guardiola-led Barcelona that is widely regarded as the best football team of the century.

He represented Mali since the age of 18, winning 102 caps and scoring 25 times in that period, as well as appearing in 7 AFCON Finals.

Yaya’s ability to feature in any position on the pitch, pick out a pass and score goals made him impossible to play against for whichever team that he went up against.

There are very few midfielders who could play box-to-box like Toure did it, whether it was during his Barcelona days or when he came to terrorize the English Premier League as a Manchester City player.

He too has won the African Player of the Year award a record four times in consecutive years from 2011-2014.

Toure was part of the Barcelona trophy that did the unimaginable, winning six trophies in a calendar year, before moving to Manchester City and helping them win a first league title in 44 years.

The Ivory Coast international represented his country at six AFCON Finals and managed a total of 19 goals in 101 appearances.

Weah, who later became the president of Liberia, is regarded as one of the players who paved the way for African footballers to play in Europe.

He spent 14 years playing club football in France, Italy and England. In total, he scored 194 goals in 413 appearances for his different clubs.

Weah helped PSG win the League title in 1994 before winning two Serie A crowns with AC Milan where he had his most successful spell and remains the only African player to ever win the Ballon d’Or.

At international level, Weah represented Liberia at two AFCON Finals and scored 18 goals in 75 appearances. After an international friendly in 2018, his number 14 jersey was retired.

One thought on “TOP 5 AFRICAN FOOTBALLERS OF ALL TIME!”