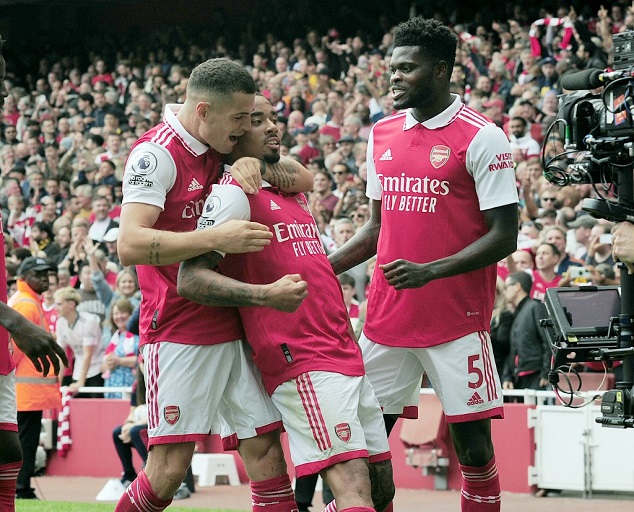 It’s been over a month of no English Premier League but it’s finally time for the action to resume in a Boxing Day special filled with mouthwatering games.

The English top flight, just like all other top leagues, took a break due to the FIFA World Cup but it’s time for teams to resume the electric football we are accustomed to.

The last round of matches was played on November 12 and Arsenal remain at the top of the table with 37 points, five more than second place Manchester City.

Mikel Arteta’s side won’t start celebrations just yet as they have been top at Christmas twice before in their history and still failed to win the league.

Arsenal are on a quest to win the English Premier League for the first time in 18 years, with their last triumph coming in the 2003/4 invincibles season.

Newcastle United are the shock performers of the season thus far and went into the break in third place with 30 points.

Tottenham Hotspur and Manchester United round up the top five with 29 and 26 points respectively, with the former kicking things off with a match against Brentford.

Wolverhampton Wanderers remain rooted to the bottom of the table with 10 points after 15 matches and are desperate to get their season on track as they take on Everton.

Nottingham Forest and Southampton are the two other teams in the relegation zone but have more than enough time to avoid the drop into the Championship.

SportPesa offers you the chance to receive up to a 350% boost on your multibet that can consist of up to 50 games!

There is no better place to start than the array of English Premier League games available on the platform.

Here, SportPesa’s Blog has a look at the top 3 games slated for Monday and gives predictions for you!

The Bees come into this game still buzzing from their shock 2-1 away win against champions Manchester City in their last league game.

The victory was their only one in their last 5 games and they hope to make history again against a Spurs side they have never beaten.

Brentford lost twice and drew once in their club friendlies over the break and are in 10th place on the EPL table, level with Fulham and Crystal Palace.

Tottenham on the other hand are in fourth place with 29 points and have the chance to go into the top 3 temporarily before other teams play later on.

They are unbeaten since the break, beating Motherwell and sharing the spoils with Nice in their friendly matches.

The visitors will be without Richarlison, Rodrigo Bentancur, Oliver Skipp and Lucas Moura who are all ruled out with injuries.

The last league game between these two teams ended in a barren draw but this is not expected on Boxing day with goals from both sides expected.

Despite the injuries and being away from home, Tottenham are tipped as favorites to win.

Liverpool have not had a great run in the league season so far and went into the break in sixth place with 22 points, 15 off the league leaders.

While Villa on the other hand have been on an improved run of form since sacking former coach Steven Gerrard in October.

Since Unai Emery took over, Villa have won 3 games and lost just once, culminating in a 2-1 victory against Brighton in their last outing on November 12.

They are currently 12th with 18 points and a victory against Liverpool can see them break into the EPL’s top 10 for the first time this season.

Jurgen Klopp’s side completed the double over their opponents last season but have a host of injury concerns ahead of the highly anticipated clash.

Emiliano Martinez, who just won the World Cup with Argentina, will miss this game as well as key players Philippe Coutinho and Jacob Ramsey.

The hosts look a new and improved side under Emery and with Liverpool’s unconvincing form, a draw could be the most likely outcome.

The English Premier League leaders come into the game on a three-match winning streak and are looking to extend their lead at the top.

A 2-0 win away at Wolves was their last triumph before the break and followed it up with wins against Lyon and AC Milan in their friendly matches.

However, their most recent outing ended in a 2-0 defeat to Juventus but this is unlikely to continue in the domestic arena.

In this all-London affair, West Ham are on a poor run of form that has seen them lose their last 3 league games, dropping to 16th on the log.

The Hammers are just a point above the relegation zone and will need to find their winning formula once more to turn their season around.

Gabriel Jesus is the latest on the Arsenal injury list, which will be a huge blow to the Gunners as he is expected to miss three months of action following knee surgery.

Arsenal have only lost once this season and have bagged 33 goals with only Man City (40) scoring more and it is almost a guarantee they will avoid defeat at the Emirates.

Arteta’s side are tipped to win comfortably on the night.