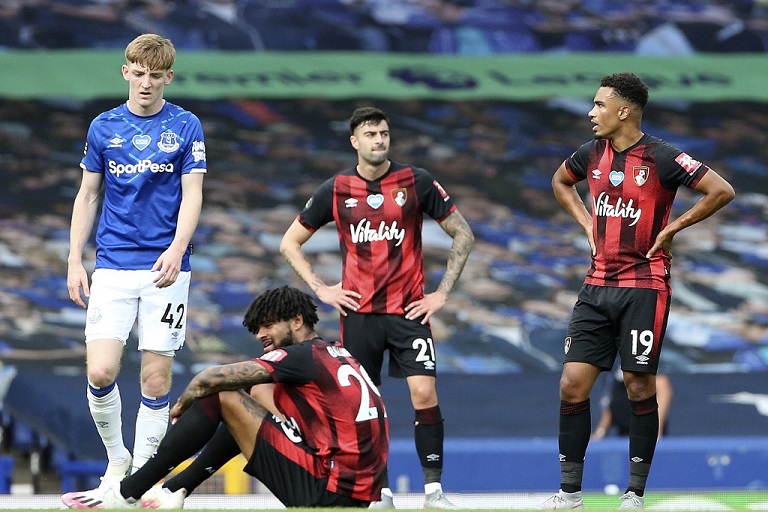 Bournemouth are all set to host Everton in the third round of the EFL Cup on Tuesday night hoping they can snap their five-match winless run.

The Cherries are coming off an unlucky 4-3 defeat to Leeds in a thrilling English Premier League encounter and are just one point above the relegation zone in 17th.

The loss was their fourth in a row, where they have conceded 10 goals in that run.

Meanwhile, Everton were also on the receiving end over the weekend as they went down 2-0 to Leicester City at Goodison Park.

Frank Lampard’s side have been in poor form recently, having only won one of their last six games across all competitions.

Bournemouth have the worst defense in the Premier League, having conceded 32 goals in their 14 games so far this season.

Bournemouth came away as 3-1 winners the last time the two sides met back in July 2020 and are desperate for a win that would see them progress into the next round.

Which of these sides will bounce back with a victory on the night? Make your predictions here.

What time does Bournemouth vs Everton start?

The game kicks off at 10:45pm Kenyan time at the Vitality Stadium.

Lloyd Kelly, Neto and David Brook are all unavailable for the home team.

Gary O’Neill is unlikely to make any changes from the side that lost to Leeds over the weekend with Dominic Solanke leading the attacking line.

For the visitors, Dominic Calvert-Lewin remains sidelined through injury but youngster Anthony Gordon will start in a bid to inspire the attack.

Alex Iwobi and Demarai Gray will start as well on opposite flanks for the Toffees.

Bournemouth vs Everton head to head

These two sides have gone up against each other 11 times, with Everton winning 5 of those games.

The Cherries have won 4 times, including the last two encounters between them with the remaining 2 resulting in a draw.

The hosts are without a win in their last 5 matches, losing 4 times and sharing the spoils in one – a 2-2 draw against Fulham.

Meanwhile, Everton have only managed one win in their last 5 games where they have lost 3 times as well.

Despite both teams being on a poor recent run of form, goals are expected in this encounter but a draw could be the most likely outcome.