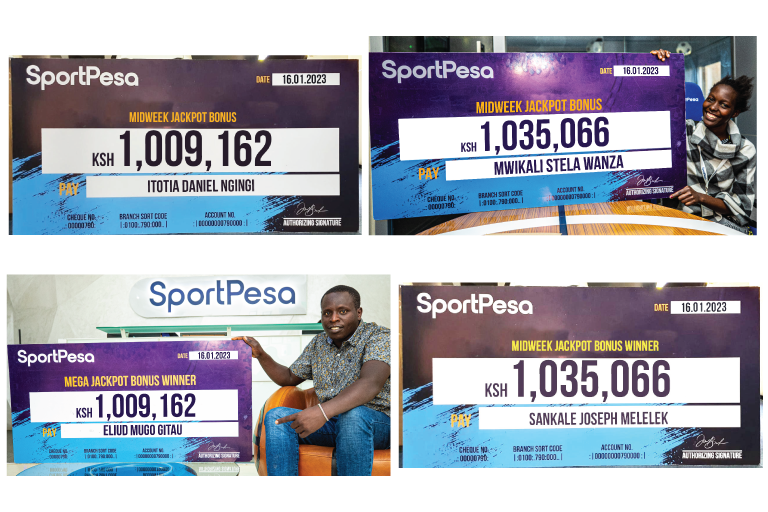 SportPesa continues to transform lives and in just under a week, there have been four new millionaires in the country courtesy of their available jackpots.

The most-trusted gaming company boasts the only two progressive jackpots in the land and the hearty bonuses continue to put a smile on their customers faces.

From their stellar efforts, Joseph Sankale and Stella Mwikali, won a healthy bonus amounting to KSHs 1,035,066.

“I cannot express how grateful I am to SportPesa for this life-changing win. I have been playing with them for 7 years because they are the ones I trust.

“As soon as the last game ended, the money was in my account, and everyone should be aware of how real they are. The payout is instant and guaranteed,” Sankale, a father of three stated.

The driver by profession went on to state how he did not have enough money to place the jackpot and instead placed a multibet with 10 shillings first.

From his multibet, Sankale was fortunate enough to win KSHs 400 and then he used his winnings to place a Midweek Jackpot slip.

“The 400 shillings I was lucky to win is what helped me because without that, I would not have placed the jackpot slip.

“I am going to invest in farming at home which will in turn enable me to make more profits to help my family,” he added.

To play on the Midweek Jackpot, it only costs KSHs 99 and Stella Mwikali also became a millionaire after she managed 12/13 correct predictions as well.

The winning did not stop there as two more people managed 15/17 correct predictions in the improved 5 in 1 SportPesa Mega Jackpot.

The Mega Jackpot offers different jackpots where one can choose to play all 17 games or 16, 15, 14 and even 13 games with bonuses for all.

Daniel Itotia and Eliud Mugo both failed to predict just two of the 17 games up for selection and bagged a handsome KSHs 1,009,162 for their efforts.

“I was about to ask for a loan from the bank so I can purchase a piece of land but now I do not have to because of SportPesa.

“My whole family is excited about this win, it’s the biggest amount I have ever won and I am grateful that I can begin my year like this,” Gitau told SportPesa’s blog.

Mugo, who is now a driver, got into his new line of work after his hawking business failed to take off and now he can dream big courtesy of his bonus victory.

Admitting that he placed the Mega Jackpot slip after persuasion from his friend, Mugo revealed that he has received numerous calls regarding his win.

“I have been called severally by my friends asking if this money is real and if I have actually won the bonus.

“I have told them that it is and I want to assure everyone that SportPesa is the site that I trust and I will continue to try and maybe I can win the whole SportPesa Mega Jackpot,” the father of three explained.

This week’s Midweek Jackpot kicks off on Wednesday, January 18 with an Egypt league game pitting EL Gaish against Ismaily and stands at a mouthwatering KSHs 13,286,274.

By simply clicking this link and placing your bet for the Jackpot, you could become the newest millionaire in town.

SportPesa’s Blog will have a prediction article for the Mega Jackpot later in the week and for just 99 shillings, you can go for the ultimate prize!