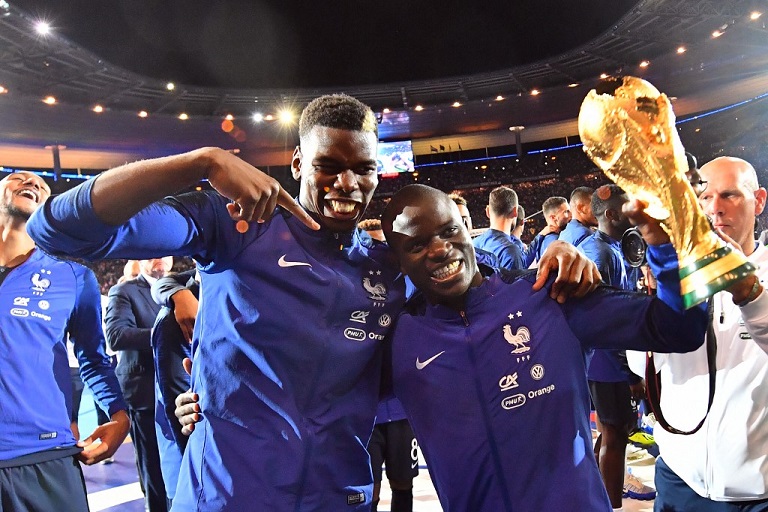 It’s already been 4 years and now the 2022 FIFA World Cup kicks off on Sunday, November 20 with hosts Qatar taking on Ecuador.

The biggest and most watched football spectacle brings with it lots of expectations and the entire world is all set for proceedings to kick off.

This is the first time that the World Cup is being played during this time of year as we are all used to matches in the Summer.

France are the defending champions after beating Croatia 4-2 in the Russia 2018 final and are looking to make history becoming the third country to win back to back titles.

There are plenty of top players who are certainly set to be playing in their last World Cup such as Cristiano Ronaldo, Lionel Messi, Thiago Silva, Dani Alves, Christian Pulisic among others.

Aside from the veterans, there are also many bright talents that are featuring in their first ever finals led by Brazil’s Vinicius Junior, England’s Phil Foden and Spain’s Pedri.

Legendary Mexican goalkeeper Guillermo Ochoa has been named in the squad and joins the ‘Five World Cup’ bunch as he is set to start for the South Americans.

As we count down the days to the start of the tournament, SportPesa’s Blog has a look at the ‘ghost’ starting XI that will be missing from the World Cup.

The 32-year old remains as Man United’s number one but failed to make the 55-man provisional squad as well as the traveling team to Qatar.

De Gea was Spain’s number one at the last World Cup in Russia and they were knocked out in the round of 16 by the hosts after a penalty shootout.

Coach Luis Enrique said that De Gea is now the country’s sixth choice goalkeeper and his form in the English Premier League is not good enough.

This came as a shocker to many football fans around the world especially after the center-back’s standout performances for his club this season.

Gabriel has been key in Arsenal’s exemplary run that sees them sitting pretty at the top of the English Premier League table.

He has scored 2 goals in his 18 appearances for the club in all competitions and formed a great partnership with William Saliba.

Despite a host of talent in the back line such as Thiago Silva, Dani Alves and Eder Militao, there was definitely room for Gabriel.

Though, the 24-year old can hold hope of featuring in the next edition of the tournament in 2026.

The 33-year old veteran German defender was left out of the squad for the first time since he made his debut in 2010.

Hummels has been in great form for his club but coach Hansi Flick defended his decision to leave him out of the Qatar-bound German team.

Germany are out to prove a point this time round after a very disappointing outing in Russia.

They lost to Mexico and Korea, thus failing to make it out of the group stage.

It’s no doubt that besides England fans, the whole world was looking forward to watching James at his debut World Cup.

He has been key for Chelsea in a rather dismal campaign for the Blues and had played every game until an injury that was set to keep him out for 8 weeks.

The 22-year old is highly considered as one of the best right-backs in the game but has been ruled out after injuring his knee in a Champions League game.

Fortunately, England has depth at right-back in Trent Alexander-Arnold and Kieran Tripper, but the team would have been much better off if James had been available.

Thiago is widely regarded as Liverpool’s best midfielder, and was almost certain to start but he was not included in the 26-man squad.

The 31-year old has been a key feature in Liverpool’s opening stages of the English Premier League campaign and this may have been his last chance at a World Cup.

The former Bayern midfielder was part and parcel of the squad in 2018 that reached the round of 16.

The likes of Sergio Busquets, Pedri, Koke, Rodri and Marcos Llorente will instead feature for Luis Enrique’s charges.

It is safe to say that without Ngolo Kante, France would not have been able to life the World Cup in 2018.

Kante’s natural hard-working style of play coupled with his tireless efforts and understanding of the game have been key for his club and country.

This season, the midfielder appeared in only two games for Chelsea before suffering a hamstring injury in August.

Kante has risen to prominence quickly following his Premier League, Champions League and World Cup victory in a span of a few years.

Pogba was instrumental and he capped his exemplary performance with a goal in the World Cup final against Croatia.

Since returning to Juventus, the 29-year old has yet to play a minute in the league and is unlikely to do so until after the World Cup after being sidelined by knee surgery.

After starting the season off so well for Dortmund, it’s very unfortunate that the world will not get to watch Reus in Qatar.

He has been struggling with ankle issues for the most part and that is the reason he is not part of Hansi Flick’s 26-man team.

This is the second time that the 33-year old has been ruled out due to injury after being kept out of the 2014 edition in Brazil with a knee injury.

Despite his absence, Germany went on to win the trophy after Mario Gotze’s 113th minute winner sunk Argentina.

This has to be one of the most contentious decisions made by Brazil coach Tite ahead of the World Cup in Qatar.

Despite limited playing time for Liverpool this season, Firmino has scored 7 goals and provided 3 assists in 13 games.

His stats are better than others preferred to him such as Arsenal duo of Gabriel Jesus and Gabriel Martinelli, as well as Tottenham’s Richarlison.

Tite’s decision to leave Firmino out of the squad caused a stir online but it was too little too late and Brazil will have to do without his services.

A calf muscle injury Jota sustained in an English Premier League match against Manchester City is set to keep him on the sidelines for a long time.

Since moving to Liverpool, Jota has made himself a household name in Jurgen Klopp’s team and his absence will be felt by the Portuguese.

He scored 15 times and assisted 4 in his last full season in England and was rather unlucky to suffer the injury in mid-October.

Portugal still boast loads of attacking talent in their squad led by captain Ronaldo, Bruno Fernandes and Joao Felix but the 25-year old’s presence would have been a huge boost.

The 26-year old Brentford forward has outdone himself to earn a place in the England 26-man squad but coach Gareth Southgate thought different.

Toney has already scored 10 goals in 14 English Premier League matches this season and still this was not enough for him to earn a spot.

Others such as Callum Wilson and Raheem Sterling who were called up have not even come close to Toney’s contribution this season and begs the question of why he was left out.

Toney responded to being left out of the squad by banging a brace as Brentford pulled off a shock victory over champions Manchester City at the Etihad last week.