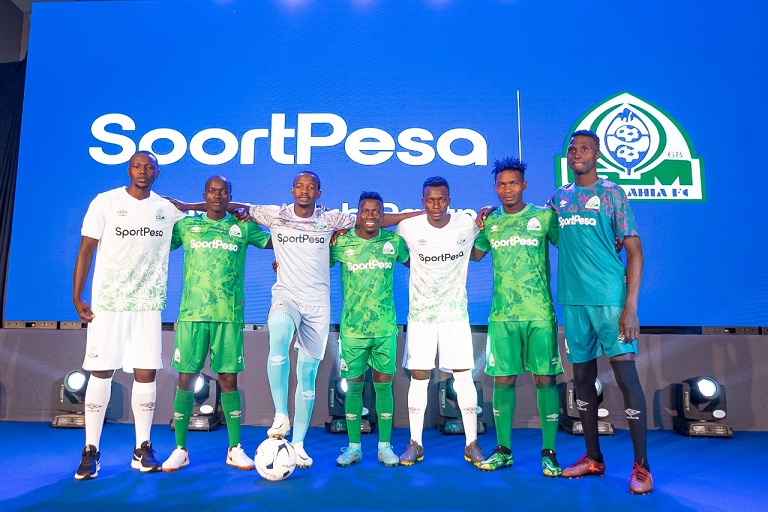 Giant gaming firm SportPesa set new standards as they put smiles on Gor Mahia with yet another spectacular event for the unveiling of their 2022/23 kits on Thursday morning.

The event was the first of its kind in Kenya for a kit launch and the glitz surrounding it was not even close to the quality of the new Umbro jersey that was unveiled.

This comes two months after Gor signed a three-year deal that saw them reunite with SportPesa as their main shirt sponsor in a deal that is worth KSHs 80 million a season.

“I have said thank you to our sponsors so many times and I’m here once again to show my gratitude. We have never seen such a launch for any kit in Kenya and I am proud that our great club is the first to do so.

“We vow to make SportPesa proud as we put on great performances to give them the visibility they deserve as they partner with Gor Mahia,” club Chairman Ambrose Rachier stated.

The jersey in itself is special because it was specifically made and designed particularly for the club and has an amazing 3D club badge imprinted on the top left corner of the shirt.

The home kit is their customary green color while their away kit is white with flashes of green in a customized print falling on the front bottom of the shirt.

Details on where the replicas can be purchased will be communicated soon, they will be sold at KSHs 2,500, and all eager fans can stay tuned to all SportPesa platforms for the relevant information.

The record Kenya Premier League champions will don the jersey for the first time on Saturday as their season kicks off with a home match against Nzoia Sugar at Nyayo Stadium.

“Since the return of SportPesa, there has been loads of positivity around the club and this works well for me as well as the players ahead of the new season.

“I really like the new kit and we are looking forward to putting it on in front of our fans and make them as well as ourselves proud as we kick start the league,” head coach Jonathan McKinstry told SportPesa News.

When SportPesa first ventured into Kenyan football, Gor Mahia were their first partners, and this saw many firsts for the beautiful game in the land.

Gor were two-time SportPesa Super Cup winners, and this allowed them to break barriers as they played a friendly against English side Hull City in May 2018.

The record KPL winners lost via a penalty shootout but made history as Hull became the first English side to play a game on Kenyan soil.

“It’s always a good day when SportPesa and Gor Mahia come together and this one is no different. We are extremely excited for this new season and we are confident that the team will do everyone proud.

“We ensured that they got this custom made jersey just to show how highly we regard the club and our partnership. We wish them nothing but the best as the new season gets underway,” SportPesa’s Head of Marketing Liz Muragu Njenga concluded.

In November 2018, Gor continued to make history as they became the first Kenyan club to play on English soil as they lost 4-0 to Everton at Goodison Park.

This was the second time that the 19-time KPL winners played against Everton after they lost 2-1 to the Toffees in Dar es Saalam, in a match where Wayne Rooney scored on his return to his boyhood club.

Gor will be looking to extend their exemplary reign atop the Kenya Premier League standings by searching for a record-extending 20th title this season.