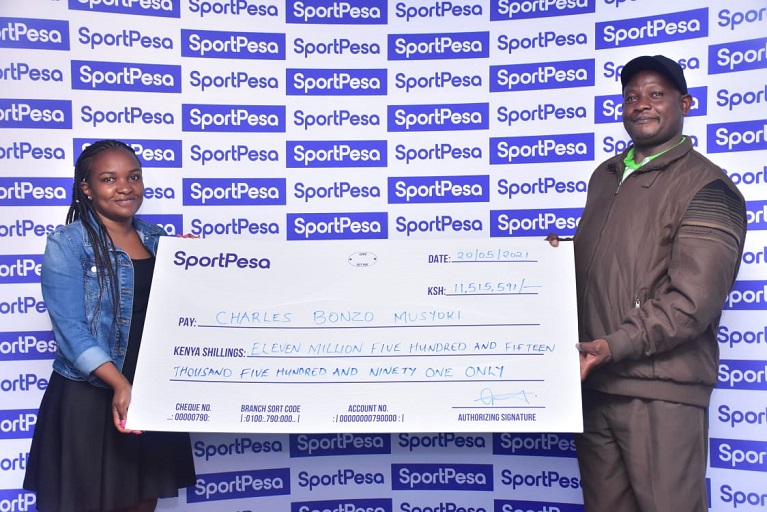 Charles Bonzo Musyoki became the latest millionaire in town after his 13 correct predictions saw him win the SportPesa Midweek Jackpot worth KShs 11,515,591.

Musyoki, a County Security Officer, explained that most of his winnings will cater to the hospital bills of his ailing wife.

He has been gaming with SportPesa and has been fortunate enough to win bonuses before but this has been his biggest victory thus far.

“I placed the bet and waited for the message that told me I was the midweek jackpot winner. My wife and I could not believe the news.

“I have won with SportPesa on many occasions and this win came at the right time because I was in need. My wife has been sick for six years and now I can afford the best care for her,” Musyoki stated.

“The money I have been using to pay for her treatments has not been enough and now even if it all goes to hospital bills, it’s okay,” he added.

The 51-year old is also an avid Chelsea fan and he believes that his side are going to win the UEFA Champions League final next Saturday, May 29.

Chelsea already lost the FA Cup final to Leicester City but Musyoki believes it was all part of the plan so as to beat Manchester City to the European title.

“We let Leicester win because we cannot win everything. We needed to focus on the final and I guarantee that the future is blue,” the ecstatic Musyoki explained.

He has insisted that he is not done yet and has set his sights on the SportPesa Mega Jackpot, which currently sits at a whopping KShs 127,251,683.

After catering to his wife’s needs, Musyoki said whatever remains he will use to take care of his grandchildren, whom he says God truly blessed him with.

“I have to try and get that Mega Jackpot one day. But for now, I am grateful to God for answering my prayers and to SportPesa for making it happen,” he concluded.