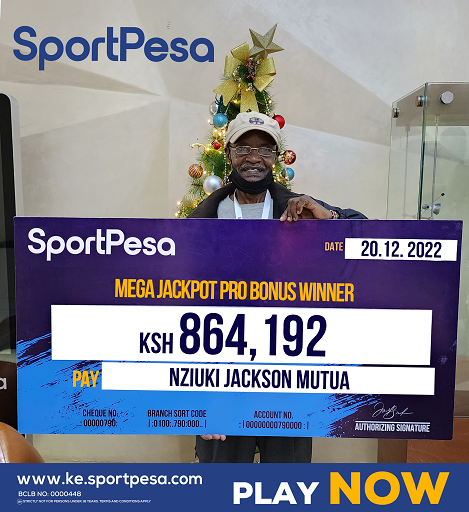 Jackson Mutua fondly recalled the admirable levels Kenyan football, especially the Harambee Stars reached after he was presented with his winners cheque on Tuesday afternoon.

Mutua became one of the first winners in SportPesa’s revamped Mega Jackpot Pro after he correctly predicted 14/17 games to win KSHs 864,192.

This new feature is an addition to the already existing SportPesa Mega Jackpot, which remains the biggest and progressive football pot in the land.

The 66-year old farmer from Machakos County expressed pure joy after the win and went ahead to tell SportPesa’s Blog his plans after the handsome payout.

“I have plans to help educate my grandchildren but before that I have to thank God by giving a tithe to my church. Whatever money remains, I will use that to purchase some land,” Mutua stated.

Mutua, a Manchester United fan, went on to recall how he loved watching Kenyan football back in the days and dreams of a time when those glory days can be restored.

He lauded SportPesa for all they have continued to do for the beautiful game in Kenya, especially for partnering with his favorite local club Gor Mahia.

“I always used to go to City Stadium to watch football because I’m very passionate about the sport. Kenya Breweries and Gor Mahia games were always my favorite.

“My greatest memory was when my fellow Kamba coach Marshall Mulwa led Harambee Stars to the CECAFA Senior Challenge Cup in the 80s. These are times that will live with me forever,” Mutua explained.

The times that the Mega Jackpot Pro bonus winner recalls are times when Kenya’s national team was filled with stars and legends of the game such as JJ Masiga and Eli Adero.

Goalkeeper Mahmoud Abbass was also part and parcel of that team which participated in the 1986 All Africa Games which Mutua fondly remembers.

“I just want to thank SportPesa for this and I hope to continue to witness them doing great things for sports in the country.

“I am going to come for the whole of that Mega Jackpot Pro, I believe that this is just a positive beginning for me and next time I could be lucky enough to get all 17 games,” he concluded.

This weekend brings with it a chance for you to become the biggest football jackpot winner in Kenya with an astounding KSHs 279,719,852.

Click this link and you could become the newest millionaire in town!