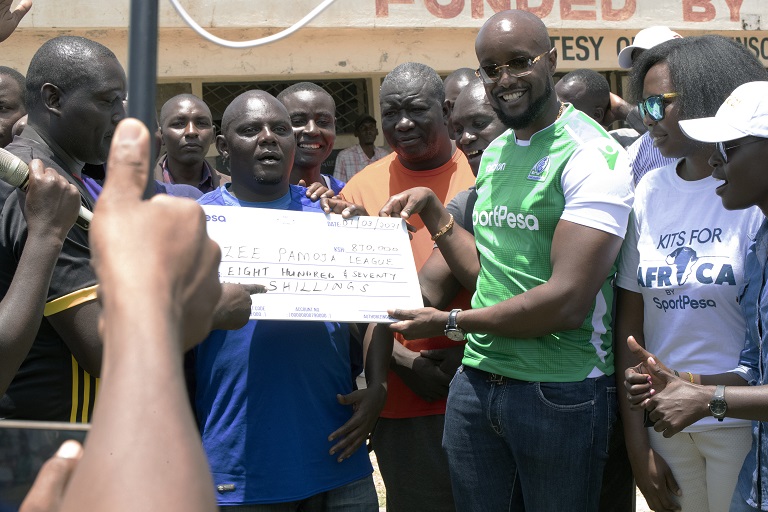 On Sunday, SportPesa Chief Executive Officer, Captain Ronald Karauri brought plenty of smiles and a symbol of hope as he attended a round of matches in the Wazee Pamoja League at Camp Toyoyo Grounds.

What would ordinarily be just another match-day in the blistering hot sun was spiced up by a surprise as the leading African gaming platform donated KSHs 870,000 in a newly-formed sponsorship deal.

Wazee Pamoja League, as they are known today, comprises of 11 teams who’s players and not younger than 33 years old and play throughout the year in a competitive league.

“I’m very happy to be back here at Camp Toyoyo, it has been a while and it is befitting that the day I returned was for such a great cause.

“I have seen so many players here, some who have played in the Kenya Premier League in the past and they need to be taken care of as well,” Captain Karauri stated.

There are many former professional players who have found a home in the league, with the likes of former Tusker FC and Kenya international Osborne Monday, who’s Cruz FC were 3-1 winners in an entertaining match against Tipples FC.

“The league is very important as it keeps the Wazee active and helps them remain as key figures in the community, so we saw it as a perfect start for SportPesa as we return to continue our endeavor to develop football in the country,” he added.

Bernard Miruka, the Chairman of Wazee Pamoja League Governing Council, led the entire fraternity in thanking SportPesa for choosing to partner and support them as well as for the generous donation.

“This league has been going on for 14 years and we have never had a sponsor, it has always been money from our own pockets that has sustained us.

“I’m very happy that as we enter our 15thyear, we have finally gotten a sponsor who are ready to help us ensure that the league flows seamlessly,” Miruka explained.

The league runs for nine months with matches played every Sunday, from February and the last round of fixtures played in November with a break in between the season.

Aside from providing a place for people to come together and play with fans from all walks of life in attendance to cheer on their particular teams, the Wazee Pamoja League also does their part in giving back to the community.

“I cannot begin to explain how happy I am that SportPesa has come on board to donate money to help us continue with our league.

“There’s always costs to host teams, referees need to be paid as well as securing the pitches that we need to play our fixtures.

“This will go a long way in keeping the teams afloat and we are forever grateful to them,” Omar Shaban, who plays for Paradiso FC in the league concluded.