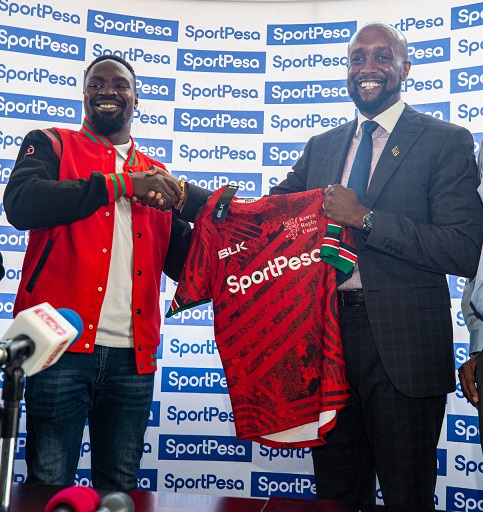 Leading gaming firm has come to the rescue of the ailing Kenya Sevens team as they announced a KSHs 126 million partnership on Thursday morning at the RFUEA Grounds.

Shujaa, as they are commonly known as, have been complaining of lack of funds as they just returned from the Cape Town leg of the HSBC World Sevens Series.

SportPesa heard their cries and responded in supreme fashion by announcing the three-year partnership that will see Shujaa don jerseys branded SportPesa as the front.

Speaking at the official launch, SportPesa CEO Ronald Karauri expressed his delight in the partnership and vowed to look after the players welfare.

“I am very happy to be back with Kenya Rugby because we had a very strong partnership with the union and we are ready to see the strides the team can make with this partnership.

“I want to assure the players that their welfare is top priority for myself and my entire team. Issues regarding late salaries and allowances are in the past. We just need you to focus on the game and make us proud,” the Kasarani Member of Parliament stated.

Shujaa finished in 13th place at the just concluded Cape Town Sevens after beating Canada 21-10 in the final.

This was the first time that the team also wore the SportPesa branded jerseys for the first time in this renewed deal following their previous partnership in 2016.

“If you look back, SportPesa has done unprecedented things in sport and our previous deal with the rugby union was one of them. Unfortunately, things were brought to a halt but we are happy to be back.

“If this team shines, then our brand shines and the country shines as well. I cannot wait to wear my jersey and support you guys because we know how great you already are,” he added.

The Kenya Sevens team have been far from their best in recent season but now seem upbeat about chasing another Sevens title to the one they won in Singapore six years ago.

“We are so grateful that SportPesa are back to help us in our time of need. All my players need peace of mind to perform and now we are confident we can have this.

“This is a company that is trusted in the sports world and we are very fortunate that they chose us. We have loads of talent and we are ready to show a better account of ourselves going forward,” Shujaa captain Nelson Oyoo stated.

SportPesa makes a return at a time when KRU has been reeling in financial crisis with Kenya Sevens having gone for three months without salaries and allowances.

The deal will see the team use KSHs 42 million annually with an additional KSHs 20 million set aside for player bonuses pegged on the team’s performance.