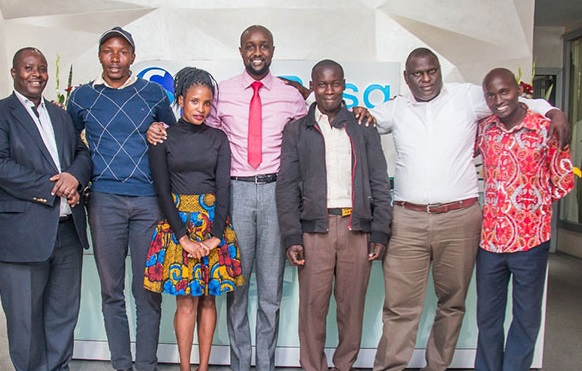 On October 23, 2018, Reuben Chengo was among six other Kenyans who became millionaires after correctly predicting the SportPesa Midweek Jackpot and today the government employee insists that his life changed that day.

Chengo (2nd from right in the above picture), who hails from Kilifi County, walked away with KSh8,245,419 after the total pot of KSh57,717,933 was split equally among the other winners of the day.

Slightly over two years since Chengo received the call that changed his life, he maintains that he still plays with SportPesa and despite the chances of repeat fortune being minimal, he believes anything can happen.

“The time that SportPesa was out of business was really tough because they are the ones that I and most of my friends trust.

“I am happy that they are back and I continue to try my chances, maybe I can win again,” Chengo said during a follow-up interview with SportPesa.

Chengo is very grateful for the money he was able to win and his biggest achievement remains that he was able to build his parents a house, returning the favor for raising him and being able to provide the little they could throughout his life.

Aside from that, he built himself a house and also managed to build separate bed-sitters and one bedroom homes that bring him an income at the end of every month, an achievement that he remains very proud and grateful for.

“I do not pay rent anymore and that is huge for me. With how the economy is now, that is a big worry for most Kenyans and I am grateful that I do not have to.

“I never even used to own a car but now I have two and I owe that to SportPesa. Being able to build my parents a house is a joy that I cannot compare to anything else,” he added.

“SportPesa has really helped the community and there have been many winners before and after me and I will forever be grateful, I have what I have today because of them,” Chengo concluded.