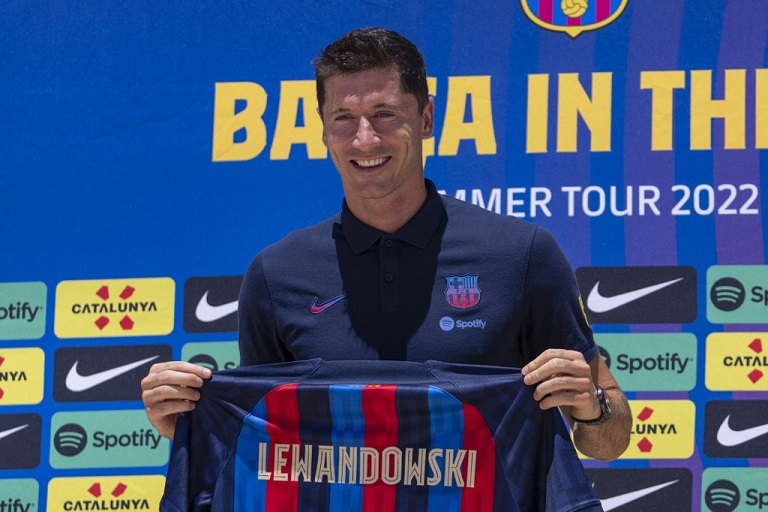 The summer transfer window continues to heat up as top European clubs continue to bolster their squads ahead of the new season.

Up until now, there have been a couple more major signings to particular clubs and this will continue until after the league starts.

We have already witnessed huge moves such as Erling Haaland joining Man City after Raheem Sterling left for Chelsea.

Gabriel Jesus left for Arsenal while Juventus confirmed the double acquisition of Angel Di Maria and the return of Paul Pogba.

Here SportPesa’s Blog has a look at the latest 5 confirmed summer signings.

The Polish forward joined his new Barca teammates in Miami after completing a £42.5m (€50m) move to the Catalan club.

The 33-year old striker signed a three-year contract and leaves Germany after spending 8 years at Bayern.

He scored 344 goals for the club in 375 appearances across all competitions.

He helped Bayern to eight Bundesliga titles in the last eight seasons, as well as three German cups, and has just been crowned the league’s top scorer for the fifth season in a row.

The sought after defender was confirmed as a Chelsea player after agreeing to a deal estimated to be worth £33m.

Koulibaly signed a four-year contract worth around £160,000 per week (£8.2m a year) net plus bonuses to move to Stamford Bridge.

The Senegal international had just one year left on his Napoli contract and joins the Blues in a four-year deal.

The Blues lost Antonio Rudiger to Real Madrid and Andreas Christensen to Barcelona this summer – both on free transfers – leaving Thiago Silva, Trevoh Chalobah and Malang Sarr as the only senior centre backs.

Bayern continued to bolster their squad with their latest signing of De Ligt for an estimated to be worth £68m.

The 22-year old Dutch defender has signed a five-year deal with the German powerhouse and scored his debut goal in a 6-2 victory over DC United.

The former Ajax defender is Bayern’s fourth summer signing after the arrivals of Sadio Mane, Ryan Gravenberch and Noussair Mazraoui.

De Ligt leaves Juventus after three years at the Italian side, where he made 117 appearances and won both Serie A and the Coppa Italia.

The Brazilian joins the Catalan club in a deal worth an initial £49m, which could rise to £55m with add-ons.

The deal represents good business for Leeds following his 17 goals in the Premier League over two seasons.

New signing Raphinha marked his Barcelona debut with a goal as his side beat Inter Miami 6-0 in a pre-season friendly.

The 25-year-old was not widely known to English audiences when he arrived from Rennes in 2020 but he certainly is now, his explosive performances for Leeds, and subsequently Brazil.

Man United have completed the signing of Christian Eriksen on a three-year deal following a rigorous medical.

The move sees Eriksen reunite with Ten Hag, who helped facilitate the midfielder’s return from the cardiac arrest he suffered at Euro 2020.

The Denmark international signed for Brentford in January 2022 and made 11 appearances for the newly promoted side, scoring one goal.