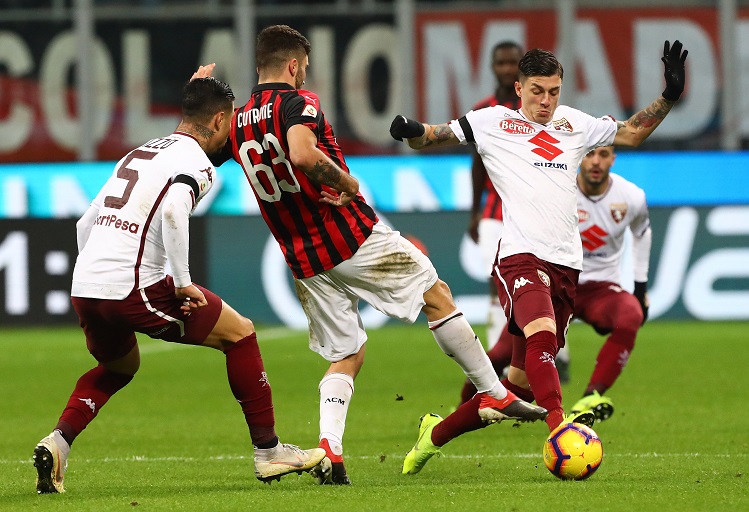 AC Milan took a huge step toward a top-four finish when they convincingly beat former Champions Juventus 3-0 over the weekend.

Now Stefano Pioli’s side travel to Torino, which has the billing to be an even more tricky encounter as the hosts continue to battle relegation.

Torino have only lost once in their last 7 games, pulling clear of the drop zone and are four points ahead of 18th-placed Benevento to set themselves up with a great chance to retain their Serie A status.

The Granata return to home turf having followed a narrow 1-0 victory over Serie B-bound Parma in their previous outing at Stadio Olimpico Grande Torino with a hard-earned 1-1 draw at Verona on Sunday.

Milan are currently in fourth place on the table with 72 points, one less than Atalanta who are also in action on Wednesday against lowly Benevento.

The reverse fixture, played at San Siro back in January, saw AC Milan run out 2-0 victors over Torino, with Rafael Leao and Franck Kessie on target.

What time does Torino vs Milan start?

The fresh absentee for Torino is Nicolas N’Koulou, who will be serving a one-match ban due to an accumulation of yellow cards.

The two wing-backs – Mergim Vojvoda and Cristian Ansaldi – will have the task of providing the width higher up the pitch, as captain Andrea Belotti and Anthony Sanabria lead the attacking line.

In the absence of Alexis Saelemaekers, Brahim Diaz ought to move out to the right flank, with Ante Rebic, who scored a wondrous goal against Juventus, coming in for Ibrahimovic.

Former Chelsea player Fikayo Tomori, who scored his first goal for Milan, will cement the defensive line alongside Simon Kjaer.

Torino vs Milan head to head

The visitors hold the advantage when it comes to previous encounters between the sides, winning 17 times out of the 34 matches played.

Another 13 have resulted in a stalemate, with Torino only managing 4 victories – the last one being a 2-1 win in 2019 courtesy of an Andrea Belotti double.

The hosts have only lost once in their last five matches, winning twice and registering a similar number of draws.

Milan on the other hand have won three times but suffered back to back defeats in their last 5 games – against Lazio and Sassuolo.

This game will be a very entertaining one, the hosts need a win to guarantee they will retain Serie A status next season whilst Milan are seeking Champions League football.

With all that is at stake, both teams scoring is almost a guarantee.