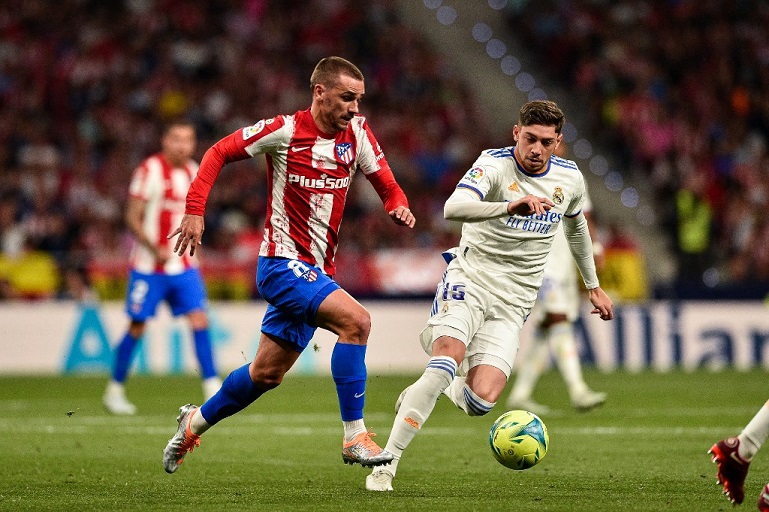 La Liga will light up this Sunday as Atletico prepare to host city rivals Real in the highly anticipated Madrid derby.

Atletico are in 7th place with 10 points after a convincing 4-1 victory over Cadiz last time out.

Real Madrid on the other hand have won all 5 games thus far and could reclaim top spot with a victory against their rivals.

The home team have picked up seven points from their last three league games, looking to better their 3rd place finish from last season.

Atletico beat Real Madrid 1-0 in May, which proved to be their first success over their rivals in the league since February 2016.

The pressure is on Carlo Ancelotti’s men to bag all 3 points and return to the top spot ahead of eternal rivals Barcelona.

Who will have bragging rights after the first Madrid derby? Play here to make your predictions and stand the chance to win.

What time does Atletico vs Real start?

The game kicks off at 10pm Kenyan time at the Wanda Metropolitano.

Stefan Savic, Jose Gimenez, Thomas Lemar and Sergio Reguilon all absentees for the derby but Jan Oblak is fit to start.

Joao Felix and Alvaro Morata will be the preferred pair up front, meaning Antoine Griezmann will settle for a place on the bench.

For the visitors, they continue to lack the services of their injured talisman Karim Benzema.

Ancelotti is unlikely to make any changes to the side that beat RB Leipzig in the Champions League in midweek.

Eden Hazard continues to push for a place in the starting XI but may still be used as a substitute.

Atletico vs Real head to head

Real have won 29 out of the 60 games played against their rivals, who have managed 12 wins.

The remaining 12 have resulted in a stalemate.

The hosts have won 3, lost one and drawn one in their last 5 games, while, Real Madrid have won all of them prior to this match.

This game is expected to be a thrilling encounter with goals expected, the visiting team are expected to grind out a narrow win on the night.