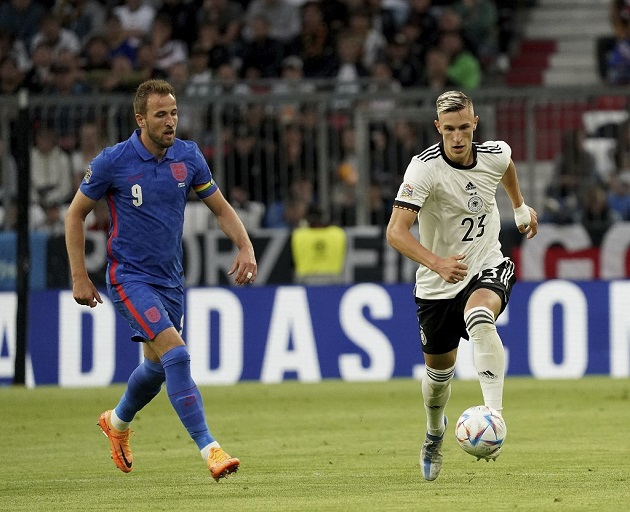 England have not won a single Nations League match and they go up against Germany at Wembley on Monday night.

Usually this would be such a titanic clash but there is only pride left to play for as the hosts sit at the bottom of Group 3 with two points.

The Germans are in third with 6 points after they were stunned by group leaders Hungary in a 1-0 home defeat last Friday.

Gareth Southgate’s team also lost by the same score line to Italy, who are in second place with 8 points.

England have now failed to score in 3 successive matches for the first time since 2000, and their solitary goal in the tournament so far has been a Harry Kane penalty.

Though the Euro 2020 runners-up are unbeaten in 15 games at Wembley – winning 13 of them, and will hope to continue the streak.

Prior to being undone by Hungary, Germany’s most recent loss was their 2-0 Euro 2020 last-16 defeat to England at Wembley 15 months ago.

What time does England vs Germany start?

The game kicks off at 9:45pm Kenyan time at Wembley.

Ben Chilwell, Marc Guehi and Ivan Toney were all left out in the defeat against Italy but will all play here.

Trent Alexander-Arnold was an unused substitute in that game and is likely to remain on the sidelines for this game as well.

Jack Grealish is suspended for this game and Mason Mount is likely to be selected to feature in the starting XI.

Harry Kane will remain in charge up front to lead the attacking line.

For the visitors, Manuel Neuer and Leon Goretzka remain sidelined through illness and will be joined by Julian Brandt.

Thilo Kehrer or Matthias Ginter are expected to replace Antonio Rudiger in the heart of defense after he was booked and is suspended.

Leroy Sane and Kai Havertz will have the onus of providing the chances for goals up front.

England vs Germany head to head

From 12 matches played between these two sides, both have won 5 times and 2 have resulted in a stalemate, including a 1-1 draw last time they met in June.

Both sides are far from their best run of form with the hosts losing 3 times and sharing the spoils in 2, over their last 5 games.

The Germans have won only once in that run but have lost just once as well.

With their run of form, it is unlikely that either side will win on the night. A draw could be the most likely outcome.