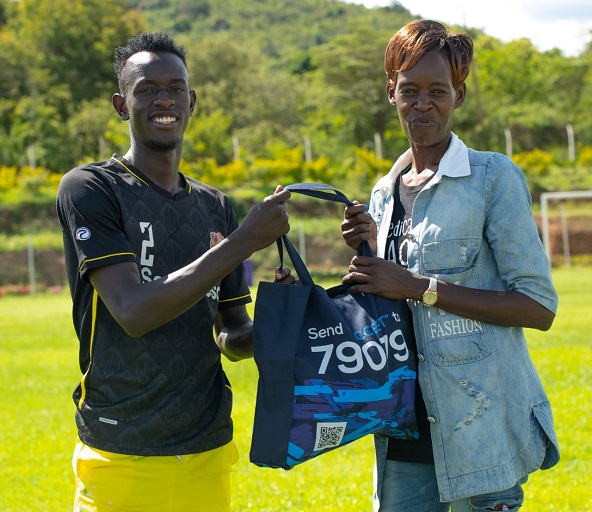 Murang’a Seal players paid tribute to their mothers on Friday after a training session at their home ground St. Sebastien Park on Thursday.

Seal, are currently in 10th place on the National Super League table with 30 points, despite playing four games less.

With Mothers Day coming up this Sunday, a team from SportPesa’s Offside football show decided to surprise a couple of them.

We all know the undying love of a mother is unmatched and they should be celebrated everyday and not just on Mother’s Day, the players were all in agreement.

Fabian Barthez, who is the key piece in the Seals midfield, was a guest on the show and was taken by surprise as his mother walked onto the set.

“I actually cannot believe this, how did you guys even get my mum to come here today?

“This is a great surprise and as always, I’m grateful to see my mother because I owe everything I am to her and how she raised me,” Barthez explained.

Murang’a Seal entered a partnership with giant gaming company SportPesa last year as they continue to seek a way into the Kenya Premier League.

His mother, Judith Adhiambo Adkiny, a Kenya Prisons officer is Barthez’ number one fan and never misses a home game.

“I am very proud of my son and it is lovely to see that his love for the game has brought him this far.

“I always come watch him play and I’m extremely happy I could surprise him today, the look on his face was priceless,” she stated.

Barthez, who is famously named after the legendary goalkeeper, is a Manchester United fan and went on to state how important his mum has been in shaping his career.

When asked what he would do if he was to win the SportPesa Mega Jackpot, which stands at a whopping KSHs 206,921,595 – he had this to say:

“The first thing I would do is to make sure my mother is okay. There is no way I can ever thank her for all she has done but that would be a perfect start.

“Apart from being my disciplinarian, my mother has guided and me and taught me the discipline that I require to make it in football,” he concluded.

His teammate, George Karimi, who plays as a right back for the NSL team was also caught off-guard as his mother too was on site to surprise him.

The right-back Karimi is a long-serving Seals player and has been with them since the team was founded in 2016.

“I know how hard-working my mother is and that is why she never gets time to come all this way to watch me play.

“Nonetheless, she is very supportive of my career choice brought on by my love for football and I can’t explain how happy I am that she has finally seen our home ground,” he stated.

The players later had lunch with their mothers who were very grateful for an early Mother’s Day outing as they repeatedly called it.

“I do my best to encourage my son and with the type of dedication he has shown for football throughout his life, I had to support his dream.

“It has been a wonderful day and I do feel appreciated,” his mother Pauline Wambui concluded.