MOROCCO ON THE BRINK OF WORLD CUP HISTORY BUT PORTUGAL TEST FIRST. PREDICTION 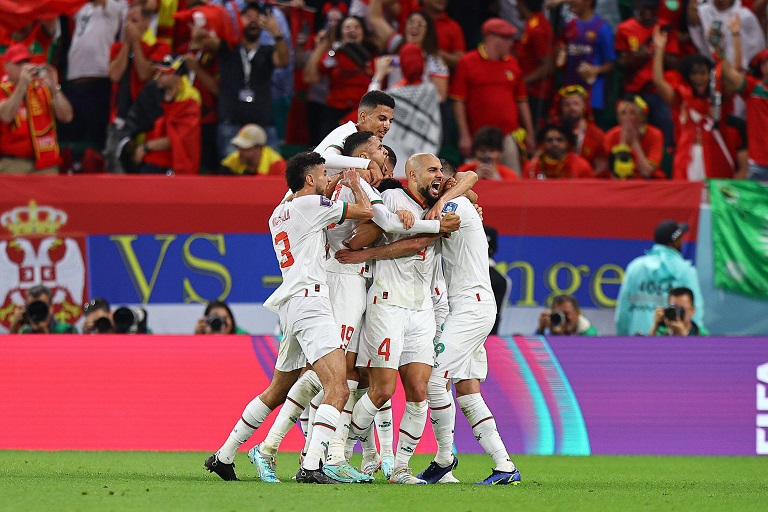 Morocco are hoping lightning can strike twice when they take on in-form Portugal in their World Cup quarterfinal clash on Saturday evening.

The Atlas Lions pulled off a major upset as they held off Spain in the round of 16 before beating them 3-0 on penalties after a superb show from keeper Yassine Bounou.

This marked the first time that Morocco have qualified for the quarters and they are aiming to be the first ever African team in a World Cup semifinal.

Portugal on the other hand put on an exemplary show as they swept past Switzerland in a thrilling 6-1 demolition in the round of 16.

Youngster Goncalo Ramos, who started in place of Cristiano Ronaldo, proved his point by scoring the first hat-trick of the tournament.

Six of Morocco’s last seven World Cup defeats have come by a single goal margin, while Portugal have won five of their last seven games in all competitions.

Portugal are still on the hunt for a first ever World Cup title and look by far the brightest they have looked in years and remain on course.

They have qualified for every World Cup since 2002 but their best ever performance remains a third-place finish at the 1966 edition.

Which of these sides will take a step closer by qualifying for the semis? Click here to place your bet on this match.

What time does Morocco vs Portugal start?

The game kicks off at 6pm Kenyan time at the Al Thumama Stadium.

The Atlas Lions may have to soldier through without captain Romain Saiss, who picked up a knee injury in the game against Spain.

The duo of Sofiane Boufal and Nayef Aguerd were both substituted off with injuries as well but will be assessed before the game.

Achraf Hakimi has completed 11 tackles in 17 attempts in the tournament, more than any other player, he will start as well as Hakim Ziyech down the right flank.

Nuno Mendes has been ruled out for Portugal and whether Danilo will be fully recovered to start is still yet to be decided.

Bruno Fernandes will continue to be the spark in their midfield and Ronaldo is hoping to return to the starting XI despite the show from Ramos.

Morocco vs Portugal head to head

The only competitive match between these two sides ended in a 1-0 victory for Portugal courtesy of a Ronaldo goal in 2018.

The Atlas Lions are unbeaten in their last five games – winning three and two barren draws against top teams Spain and Croatia.

Portugal have lost just once in that run, the shock 2-1 defeat to South Korea, but have won the remaining four games.

The African side have only conceded 2 goals in their last 10 games, proving to have a mean defense but go up against a Portugal side who have scored 20 in that run.

Both teams are set to score with over 2.5 goals the best bet for this game.