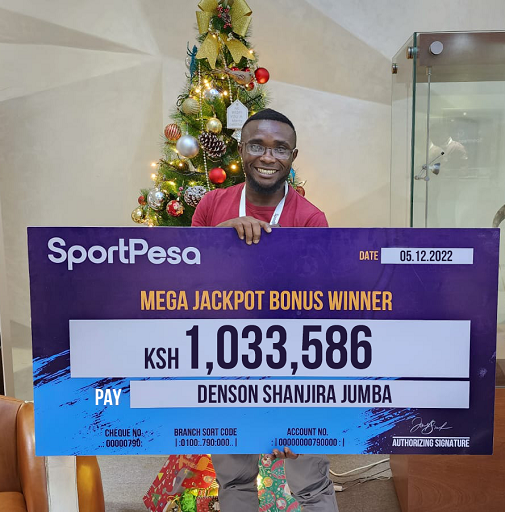 Denson Shajira’s festive season got off to a very happy start after he scooped a hearty bonus for getting 14 correct predictions in SportPesa’s Mega Jackpot.

Shajira credited his win to early analysis of the games, adding he will employ this tactic to boost his chances of bagging the entire jackpot in the near future.

“I have been playing the SportPesa jackpots which are my favurite and I always come close to winning when I take my time to carefully analyze the matches.

“I am glad that today this has paid off with a bonus win but I believe I can win the overall jackpot so I am not done yet,” he told SportPesa’s Blog.

Shajira, a self-employed resident of Garissa who deals in fabrication of aluminium panels said the bonus win could not have come at a better time as he was planning to grow his business.

The progressive SportPesa Mega Jackpot now stands at a record-breaking KSHs 273,739,236 and it only costs KSHs 99 to place your bet.

Even if you are not fortunate to predict the outcome of all the games, SportPesa offers tantalizing bonus payouts from 12-16 correct predictions.

You can click this link to try out the Mega Jackpot and you too could make history by becoming the biggest football jackpot winner in Kenya.

SportPesa also offers a Midweek jackpot which currently stands at a staggering KSHs 15,003,352 and also has bonuses from 10-12 correct predictions.

The Midweek Jackpot starts on Wednesday, December 7 as struggling Huesca battle it out against 8th place Andorra in the Spanish Segunda division.

This is the first competitive match between these two sides and Huesca are looking to snap a four-game winless run.

The final game in the jackpot will be the only World Cup game in the list as well with a quarterfinal clash pitting Netherlands against Argentina.

Both teams have won 3 out of their 4 games at the Qatar tournament so far but the Dutch come into the game unbeaten in the competition thus far.

Lionel Messi’s side have won three on the bounce following their opening defeat to Saudi Arabia, giving this the potential to be a cracker.

This game could be decided after extra-time and you can click here to place your midweek jackpot bet slip!