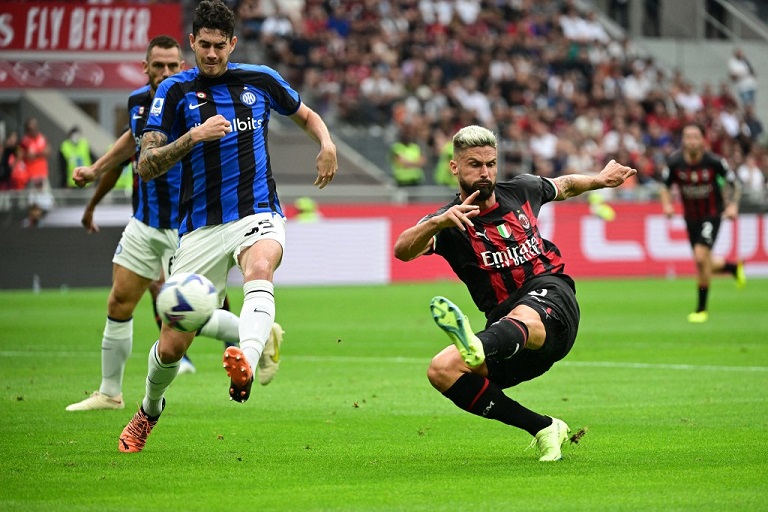 City rivals Inter and AC Milan will square off in the SuperCoppa Italiana as both teams seek to bag their first piece of silverware for the season.

The only previous Milan derby in Italy’s super-cup competition came back in August 2011, when the Rossoneri won 2-1.

Milan could now win consecutive games against their fiercest foes for the first time since the same year with a victory on the night.

Milan come into the game on the back of a 2-2 draw against Lecce, while Inter battled to a slim 1-0 win at home to Verona.

Inter have won 8 of their last 10 in the top flight – including against previously unbeaten Napoli – and they join Juventus in third place; within a point of Milan.

Having beaten Juventus to the Coppa last spring, the Nerazzurri will now be aiming to win successive super-cups for the first time since 2006.

Inter are unbeaten in their last six official games in all competitions, with their previous defeat coming at the hands of Juventus in November last year.

Milan are unbeaten in their last five matches in the Serie A but did suffer a shock 1-0 defeat at the hands of Torino in the Coppa Italia last week.

Which outfit will beat their city rival to clinch the SuperCoppa Italiana? Click here to make your predictions for the clash.

The game kicks off at 10pm Kenyan time at the King Fahd International Stadium.

Edin Dzeko will attempt to become the oldest player to score in SuperCoppa history; overtaking Cristiano Ronaldo as he starts for Inter.

Captain Samir Handanovic and midfielder Marcelo Brozovic have been ruled out by Simone Inzaghi due to their injury problems.

Simon Kjaer and Divock Origi both return from injury but are unlikely to get a place in the starting for Milan.

While Stefano Pioli served a one-match suspension and is available for this game from kick-off.

Up front, Olivier Giroud will continue to lead the attacking line and will be supported by Brahim Diaz and Rafael Leao.

Inter Milan have a slight edge in the Derby della Madonnina and have won 85 out of the 233 matches played between the two teams, as opposed to AC Milan’s 79 victories.

Inter are unbeaten in their last 5 games, winning 3 and sharing the spoils in the remaining two, while Milan have only managed one win in that run and have lost 3 times.

This will be a closely-contested match but it is important to note that last two matches played between these two Serie A giants have produced a total of eight goals.

Inter may just edge their rivals to win on the night.