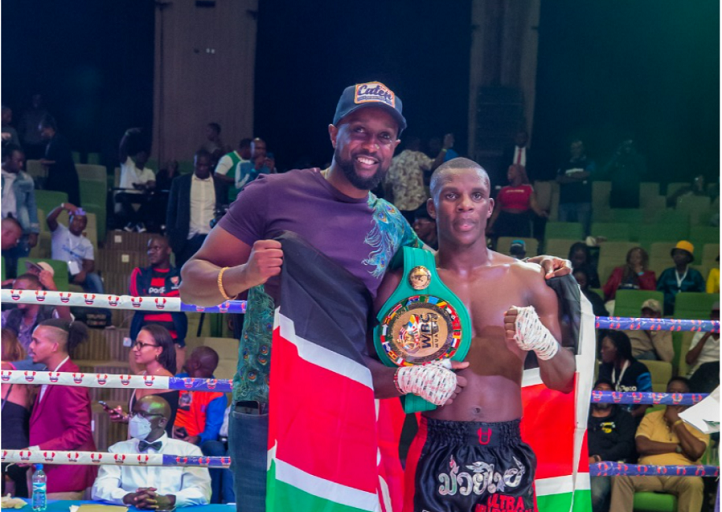 Martin Achebi battled through five rounds to retain his WBC Muay Thai Welterweight title in front of a jubilant crowd at the Bomas of Kenya on Saturday night.

In an event dubbed the Ultra Fight Series, there were two title fights where Kenyan fighter Javan Buyu saw his undefeated run halted by Senegalese Samb Mbaye at the packed arena.

Achebi narrowly beat Brayan Mattias from Cape Verde by one point in a hotly contested main event as the Kenyan ensured the belt he won on October 9 last year remained at home.

Mattias looked to be in control over the first two rounds but as the bout progressed, Achebi seemed to get revitalized with the home crowd cheering him on every step of the way.

“I cannot explain how excited I am that I managed to win this fight and retain my belt.

“I could not have done this without my coach, my teammates and I am so grateful for the support and efforts that have brought us this far,” Achebi explained.

A calculated reverse elbow into Mattias’ face in the third round cut him below the eye and once the blood began oozing, it seemed as though it was all over for the France-based fighter.

Credit to him for hanging on until the last round but Achebi proved to be more aggressive and durable as he hang on for the crucial win.

“He put up a good fight and it wasn’t easy but I thank God that I was able to push through and retain this belt in front of my home fans.

“I’d like to also thank SportPesa for coming through and putting this Fight Night together. This is a great step in the continued efforts to put Kenya on the international Muay Thai map,” the 24-year old concluded.

The pompous occasion got underway in sublime fashion as Ultra Fitness’ up and coming fighter Ben Bottleberg won the first fight via a technical knockout in the first round.

“I want to thank God, my coach and everyone who came out to show support. I wouldn’t have had my debut go any other way,” said Bottleberge after he floored his opponent Brian Kimani to win his first ever fight.

The other title bout saw Buyu, who came into the fight on the back of 9 wins from 9 fights, lose to 19-year old Mbaye in a heated affair that lasted all five rounds.

In the end, his opponent garnered more points and was crowned the new WBC Muay Thai featherweight champion.

“It’s tough to lose by such a small margin but nonetheless I want to congratulate my opponent for putting up a good fight.

“Though it was not meant to be today, I will continue to work hard and push myself because I’m only just getting started and I am excited to see what the future holds,” a confident Buyu stated after the fight.