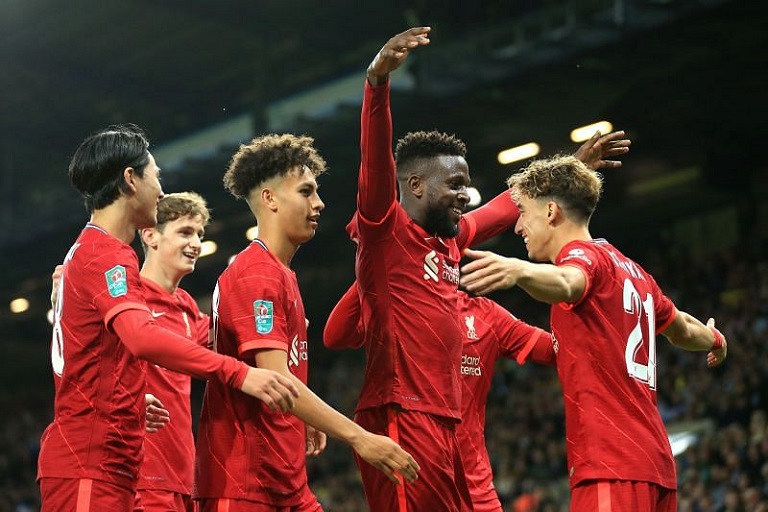 The match was scheduled to be played last week but had to be postponed due to a surge in cases at Liverpool.

A final place awaits either side against either Chelsea or Tottenham, who play their second leg on Wednesday night.

Arsenal have enjoyed a smooth run to the semis – scoring 16 goals in four victories against West Bromwich Albion, Wimbledon, Leeds United and Sunderland.

Mikel Arteta’s side are seeking a first League Cup triumph since 1993, meanwhile Liverpool last won the title in 2001.

Who will put one foot in the final? Play here to make your predictions for the highly anticipated encounter.

Mohamed Salah, Sadio Mane and Naby Keita are all with their national teams for AFCON.

Trent Alexander-Arnold tested positive for covid and will be unavailable meaning Kostas Tsimikas will start.

Diogo Jota will be the key man in the Liverpool attack, alongside Curtis Jones and Takumi Minamino.

For the visitors, Pierre-Emerick Aubameyang, Thomas Partey, Nicholas Pepe and Mohamed ElNeny are all with their national teams.

Eddie Nketiah has failed to impress the last few chances he has gotten so Alexandre Lacazette may be called upon to start.

These sides are no strangers having played 57 matches between them.

Liverpool have won 18 times, compared to Arsenal’s 20 victories while the remaining 19 have resulted in a draw.

The reds have only won once in their last five matches, their worst run of the campaign so far compared to Arsenal who have won three times in that run.

Goals will not lack in this fixture but with a second leg looming, Liverpool are tipped to take all three points before their trip to the Emirates next week.