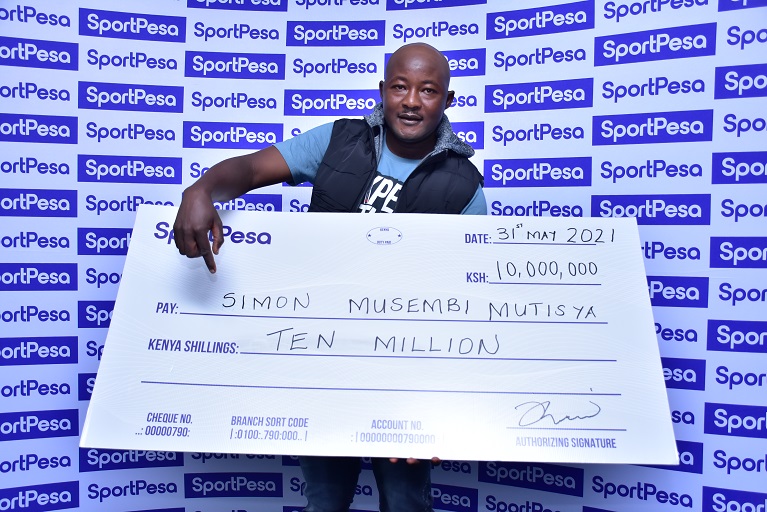 Barely a week after the SportPesa Midweek Jackpot was reset, Simon Musembi Mutisya became the fourth winner of the handsome prize this year.

The 36-year old’s life has been turned around after he correctly predicted the outcome of a select 13 games in the midweek jackpot, winning KShs 10,000,000.

“I was at my store when I got the congratulatory message from SportPesa at around 6.33p.m.

I was so happy and immediately showed my brother so that he can confirm that the money is mine,” an ecstatic Mutisya told SportPesa’s blog.

Mutisya, who is a shoe salesman by profession, placed two separate jackpot slips and was fortunate enough to get all predictions correct in one of them.

He is a passionate football fan who locally supports AFC Leopards and in the English Premier League, Mutisya is an Arsenal FC fan.

“AFC Leopards is my team and honestly I am quite disappointed that they dropped points last weekend after the shock defeat to newcomers Bidco FC.

“Though I still have faith that they have what it takes to go on and win the Kenya Premier League title,” the 36-year old stated.

Leopards are on the hunt for a first KPL title in 23 years, having last lifted the coveted trophy in 1998.

Aside from that, his other team Arsenal also have been on a torrid run of form that has seen their trophy drought extended to 17 years – their last victory coming during their 2003/4 invincibles campaign.

“SportPesa is true. Moments after receiving the message that I had won I got a call from their customer care.

“They actually looked for me before I contacted them and that showed how honest they are and for that I am truly grateful,” Mutisya added.

“I have been playing with them since 2014 and this is the biggest sum I have ever won. I thank God that I was able to win this money.

The father of three plans to invest his money in something that he will see fit that will enable him to provide for him and his family for years to come.