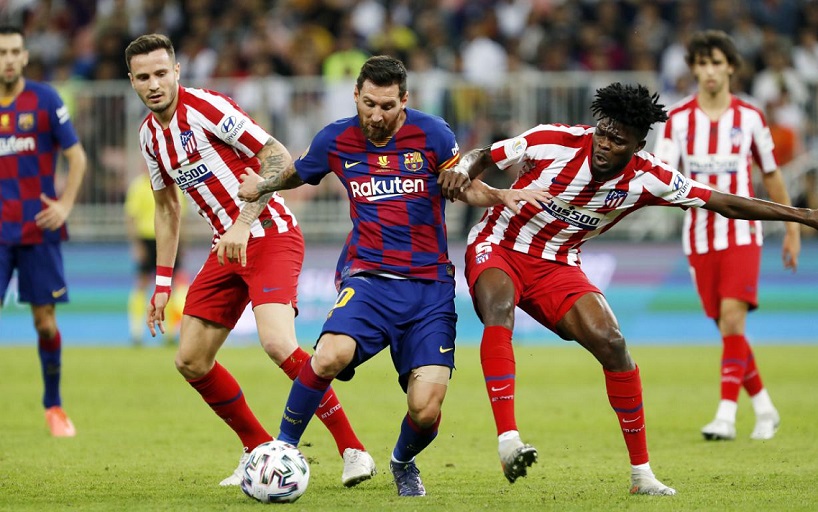 There is still all to play for in the Spanish top flight as Atletico Madrid hold a narrow lead in the standings ahead of one of the standout fixtures on the calendar.

Diego Simeone’s side sit atop the league table with 76 points, two ahead of city rivals Real Madrid and Barcelona who are tied on 74 with four games left.

Saturday’s match carries with it lots of pressure for both sides, especially Ronald Koeman’s Barcelona who have not beaten Atletico since a 1-0 victory in 2019.

One trophy is already in the bag, having beaten Athletic Bilbao 4-0 in the Copa del Rey final in the middle of April, and they can now put their full attention on finishing at the top of the pile in La Liga.

Atletico are bidding to win their first La Liga title since the 2013-14 campaign, when they ultimately finished three points clear of second-placed Barca and third-placed Real Madrid.

Simeone’s side have the best home record in the league this term, picking up 42 points from 17 matches but they have dropped points in seven of their 17 away fixtures and have found it difficult to pick up positive results at Camp Nou.

What time does Barcelona vs Atletico start?

Martin Braithwaite, Philippe Coutinho and Ansu Fati remain on the sidelines through injury for the home side.

Antoine Griezmann is expected to start against his former employers alongside Lionel Messi, meaning that Ousmane Dembele may have to settle for a place on the bench.

Sergi Roberto might be preferred to Sergino Dest in the right-sided wing-back position.

As for the visitors, Joao Felix is the most notable absentee but otherwise Simeone has plenty of options to choose from.

He could retain his attacking line-up of Luis Suarez and Angel Correa in the final third.

Barcelona vs Atletico head to head

The hosts have won 27 matches out of the 53 played, with Atletico coming out victorious on 12 occasions.

Both sides come into the game having lost just once in their last 5 matches – a 2-1 defeat for the hosts against Granada whilst Atletico fell to Bilbao by the same score-line.

Judging by the visitors tough defense and Barcelona’s desperate need to reduce the gap or surpass them on the table, this could be a very cagey encounter. Though both teams will get at least a goal in the game.