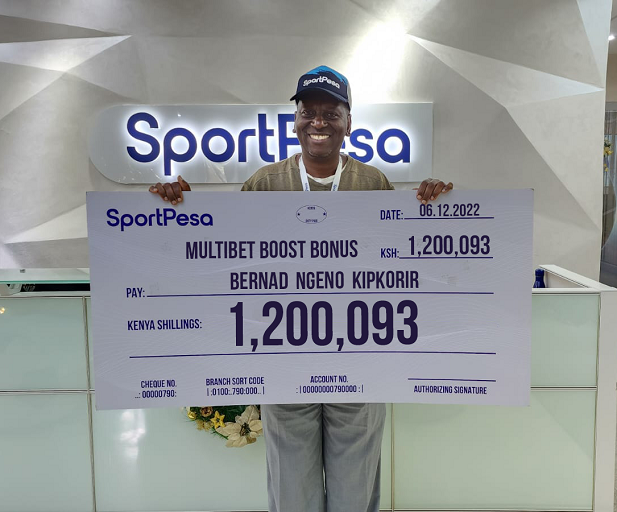 Since the introduction of the Multibet Boost on SportPesa, we have witnessed some surreal wins and B Kipkorir becomes latest star of the day with his efforts.

Kipkorir managed to win an astounding KSHs 1,200,093 after he placed a multibet consisting of 23 games, which began in July and concluded on November 28.

The patience in the slip is second to none and his winning selection saw him receive a 50% boost that amounted to KSHs 500,000.

SportPesa changed the game in that on your selection, you can receive a 350% boost on your multibet that can consist of up to 50 games.

Kipkorir, who is a shopkeeper in Kericho, was elated after his hearty win and admitted that he is now setting his sights on the SportPesa Mega Jackpot.

“It was a long bet which included four World Cup matches and despite the upsets that were there when the tournament started, I am glad that my initial analysis paid off.

“The boost has helped me because out of Ksh100 which I used to place the bet, I am now a millionaire!”, an elated Kipkorir said.

The last four games on his winning slip included only two teams at the ongoing Qatar 2022 FIFA World Cup, picking wins for only Brazil and Portugal.

Brazil’s group game victories against Serbia and Switzerland came through for him, as well as Portugal’s wins against Ghana and Uruguay.

“I think what has worked for me is having patience because since I Joined the SportPesa platform in 2019, this is my first major win for which I am grateful,” Kipkorir added.

He becomes the biggest multibet boost star of the day, surpassing Joshua O, who impressively won a handsome amount of KSHs 1,160,093.03 in October.

As Kipkorir plans to open his business courtesy of his hearty win, you as well can become the next multibet boost star of the day by clicking here and selecting your slip.

The quarterfinals of the World Cup kick off on Friday but there are still plenty of games to choose from on SportPesa!