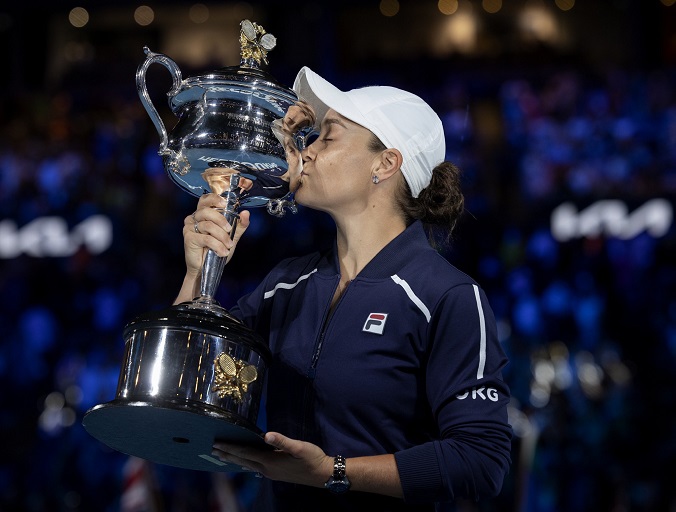 She leaves the sport having been world number one for more than two years and with three Grand Slam singles titles, having also won the French Open in 2019 and Wimbledon last year.

So dominant has she been that she ended 2021 as the top-ranked player for a third consecutive year, joining Steffi Graf, Martina Navratilova, Serena Williams and Chris Evert as the only women to achieve the feat.

Here are a few highlights from her short but illustrious career:

She rose to number two in the world rankings and the winner’s cheque, obviously the fattest of her career, was €2.3 million ($A3.73m).

The Australian wins Wimbledon on the 50th anniversary of fellow indigenous Australian Evonne Goolagong Cawley’s triumph there. Barty’s victory in 2021 fulfils a dream that leaves her wondering how long she wants to carry on.

In her retirement message Barty, who won the French Open in 2019, described her Wimbledon crown as her “one true dream”.

“I’ve had a lot of incredible moments in my career that have been pivotal moments and Wimbledon last year changed a lot for me as a person,” she said, describing the emotion of an athlete who has worked hard her entire life “for one goal.”

“To be able to win Wimbledon, which was my dream, the one true dream that I wanted in tennis, that really changed my perspective.”

Even after Wimbledon “there was just a little part of me that wasn’t quite satisfied, wasn’t quite fulfilled”, Barty now says. “And then came the challenge of the Australian Open.”

In January, Barty became the first Australian to win her home Grand Slam in 44 years.

The world number one was 5-1 down in the second set against fearless American Danielle Collins but came storming back to win on a tiebreak and sweep past the 27th seed in straight sets.

“It’s a dream come true for me and I’m just so proud to be an Aussie,” she said on the day. “But for me it’s about the memories more than the trophies, it’s the memories we make from the whole journey.”

Taking the Australian Open title is “my perfect way to celebrate what an amazing journey my tennis career has been”, Barty said as she revealed her decision to leave the sport. “As a person this is what I want. I want to chase after some other dreams.”

Barty decides out of the blue aged 18 to take a break from tennis — she had won the junior Wimbledon title in 2011 and reached three Grand Slam doubles finals.

“I know I’ve done this before, but in a very different feeling,” she now says of that decision.

At the time she received the full support of her mentor and role model Goolagong Cawley.

After putting down her tennis racquet, Barty tries her hand at cricket and turned out for the Brisbane Heat in the inaugural Women’s Big Bash League.

“What attracted me as a coach to her as a player was her ability to pick up things really quickly,” said Heat coach Andy Richards.

After one season, Barty decides to return to her first sporting love, tennis.

Barty peppers her press conferences with references to her “great team” and often uses the word “we” in tribute to them. Her fiance, aspiring professional golfer Garry Kissick, plays a pivotal role.

While she largely prefers to keep the relationship away from the public eye, she announced in November that they had got engaged.

“Future husband,” she writes on Instagram, sharing a photo of the smiling couple embracing with an engagement ring on her finger.