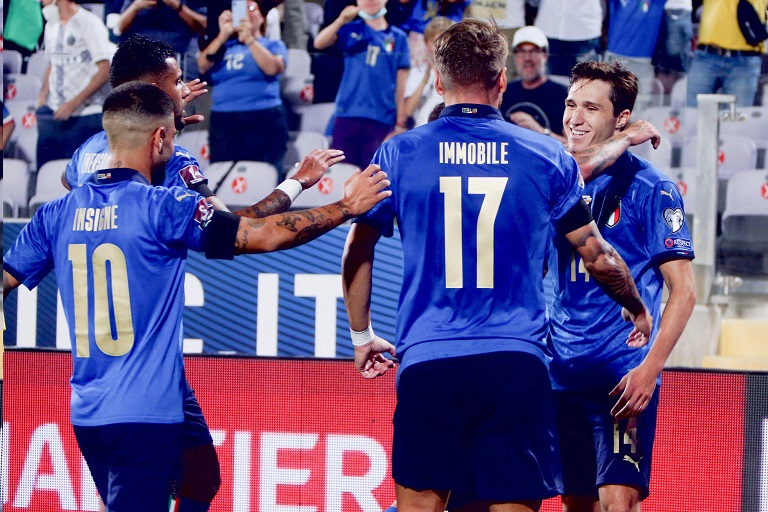 Italy will play Spain in the first semi-final of the UEFA Nations League on Wednesday night seeking to maintain their unbeaten run.

The Azzurri went six games unbeaten in League A Group 1 to make it to the last four, stretching their run to 37 matches without defeat.

Spain on the other hand were top in League A Group 4 to set up the clash with the reigning European champions.

The winner of the game will either play Belgium or France in the final of the competition.

That summer loss to the European champions means that Spain head into Wednesday’s battle having won just one of their last five against Italy in all competitions.

What time does Italy vs Spain kick off?

The game starts at 9:45pm Kenyan time at the San Siro in Milan.

Rafael Toloi and Matteo Pessina will not be involved due to injury and are joined on the sidelines by Lazio forward Ciro Immobile.

His absence could prompt Roberto Mancini to hand Moise Kean a start supported by Federico Chiesa and Lorenzo Insigne.

Gavi and Yeremi Pino are both uncapped but have been called up by Luis Enrique to help fill the void left by a host of absent talent.

Italy vs Spain head to head

Out of the 14 matches played between these two sides, Italy have only come out on top on two occasions.

Spain have won 5 times and the remaining 7 have resulted in a stalemate.

The hosts have drawn 4 times and only managed one win in their last five matches.

Spain on the other hand suffered a 2-1 loss to Sweden in between winning and drawing two matches in their last five.

Italy are the more in-form side and are not expected to surrender their incredible unbeaten run despite it being against worthy opposition.