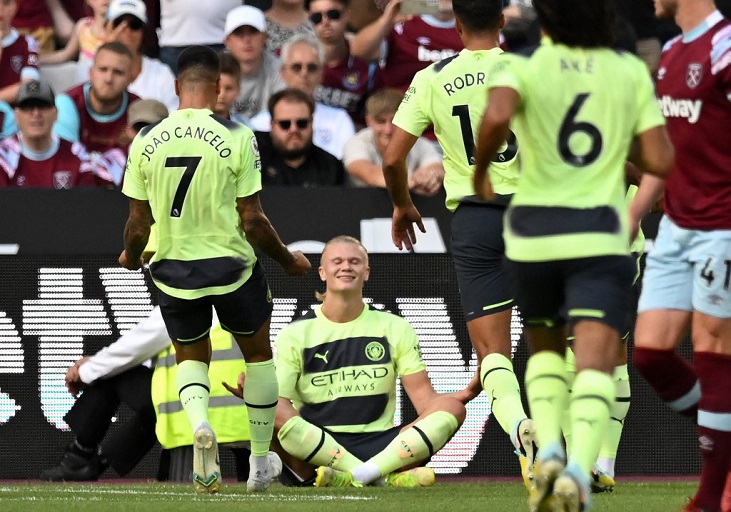 Pep Guardiola’s side were knocked out by eventual winners Real Madrid in the semis last season, while Sevilla did not make it out of the group.

Prior to the 2021-22 season, Sevilla had never failed to make it out of their Champions League group.

Sevilla also come into the game confident because they are unbeaten in 6 Champions League opening-day group-stage games.

Man City are fresh off a disappointing 1-1 draw against Aston Villa despite new signing Erling Haaland bagging his 10th goal of the season.

Meanwhile, Sevilla were undone by a forgetful 3-0 home defeat against Barcelona at the weekend.

Will Sevilla maintain their good home opening day record in the UCL or can City bounce back with a win?

What time does Sevilla vs Man City start?

The game kicks off at 10pm Kenyan time at the Ramon Sanchez Pizjuan Stadium.

Kasper Dolberg may have his full debut handed to him after coming off the bench against Barca.

Youssef En-Nesyri and Erik Lamela are also both set to start alongside Papu Gomez as well.

Haaland is definitely expected to get his UCL debut for the visitors with his fine goal-scoring form.

Kyle Walker came off injured at the weekend and will miss out, meaning Joao Cancelo will start on the flank.

Both Riyad Mahrez and Jack Grealish did not start against Villa and are expected to start alongside the Norwegian up front.

These sides have met twice before and Man City won both games, resulting in a 5-2 aggregate victory.

The home team have only won one game in their last 5 outings, losing 3 times in the process.

City on the other hand are unbeaten in their last 5 but have only won twice in that period.

Despite the home team advantage, it is not going to be an easy fixture for Sevilla. Their opponents have enough quality to register a win.