IN FORM SEVILLA ALL SET TO TAKE ON BARCELONA. PREDICTION 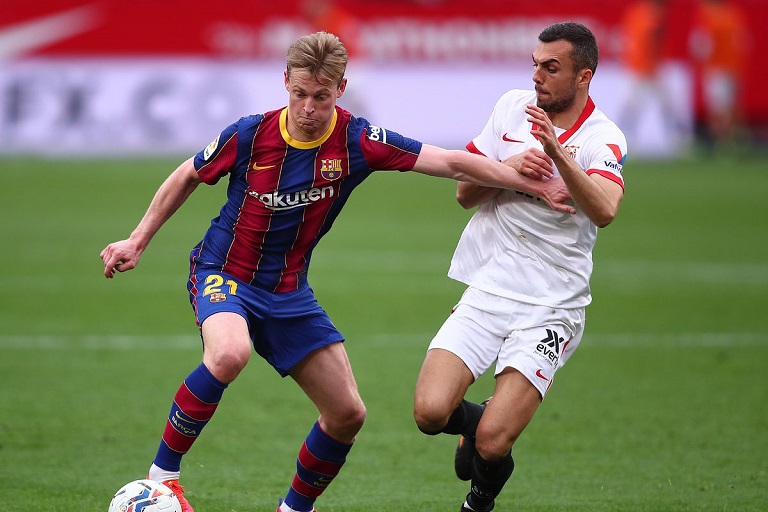 Sevilla will host Barcelona on Tuesday night in the La Liga as they seek to make it four consecutive wins.

The hosts are in second place with 37 points, six adrift of league leaders Real Madrid whilst Barcelona are languishing in 7th.

The Andalusian outfit edged reigning champions Atletico Madrid to a 2-1 victory over the weekend and will want to achieve a similar result in this fixture.

The Catalan giants secured a crucial 3-2 victory against Elche in their previous game to snap a two-match winless streak.

Who will come out on top in this midweek fixture? Play here to make your predictions.

What time does Sevilla vs Barcelona start?

The game kicks off at 11:30pm Kenyan time at the Ramon Sanchez-Pizjuan stadium.

Fernando, Gonzalo Montiel and Jesus Navas are all ruled out from the fixture due to suspension and injury.

Rafa Mir is set to return to the starting XI and will be alongside Lucas Ocampos to provide the necessary creativity up front.

For the visitors, Frenkie de Jong is under assessment after being withdrawn in their last game but Barca are boosted by the return of Gerard Pique.

Memphis Depay remains absent and Phillipe Coutinho will be used up front.

Sevilla vs Barcelona head to head

These sides have played each other 59 times and Barcelona have come out on top 38 times, including a 3-0 win the last time they met.

Sevilla on the other hand have managed 10 wins with the remaining 11 have resulted in a draw.

The hosts have won three times in their last five matches, lost one and drawn another.

Meanwhile Barca have only managed one win in that run, losing and drawing twice.

This match has the potential to be a cracker of an encounter but with the form that the visitors are on, it is unlikely that they can beat Sevilla.