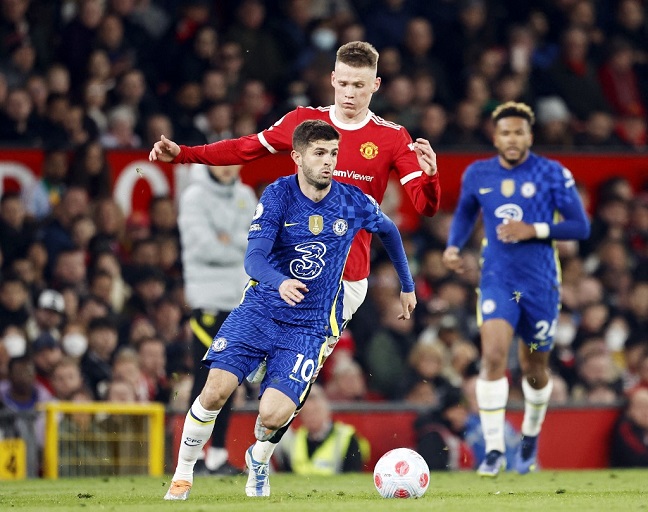 Chelsea are all set for an epic English Premier League battle when they host Manchester United on Saturday evening.

The Blues are coming off a frustrating barren draw against Brentford, while United outclassed Tottenham in a 2-0 win.

Only one point separates the two teams with Chelsea sitting in 4th place, one above their opponents.

Both league games between these two sides last season ended in identical 1-1 draws and both will feel the need to prove a point.

Chelsea have kept a clean sheet in each of their last 5 Premier League games and are unbeaten in their last 8 home matches.

Man United have lost each of their last three Premier League games in the city of London – their longest such run in the competition since 1974.

Cristiano Ronaldo walked out of the stadium before the final whistle against Tottenham and United have confirmed he will not be part of the squad.

Will these sides avoid yet another draw on Saturday? Make your predictions here.

What time does Chelsea vs Man United start?

The game kicks off at 7:30pm Kenyan time at Stamford Bridge.

Thiago Silva and Hakim Ziyech are both fit and will be part of the squad, with Matteo Kovacic expected to start.

Pierre-Emerick Aubameyang and Raheem Sterling came off the bench against Brentford but are expected to start.

Mason Mount has started every game since Graham Potter took charge and will maintain his role.

For the visitors, Erik Ten Hag is not expected to make any changes from the side that won against Tottenham.

Casemiro and Fred are both expected to start in midfield, with Marcus Rashford leading the attacking line.

United have a good record against Chelsea and have won 81 out of the 191 matches played between the two teams, as opposed to Chelsea’s 55 victories.

23 games have resulted in a draw.

These sides have an identical record coming into this game, winning 4 times and sharing the spoils in another in their recent run of 5 matches.

Unfortunately, the recent cagey nature of this game is tipped to continue and we could witness yet another draw.