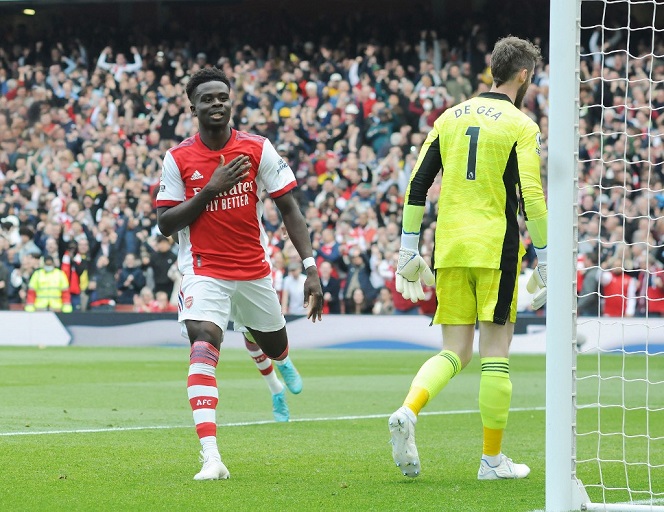 One of the best football battles of old seems to be coming alive as EPL leaders Arsenal welcome eternal rivals Manchester United to the Emirates.

A football duel that seemed to have lost some meaning as they years progressed is now alive in this top of the table clash.

Arsenal are at the top of the English Premier League table with 47 points in search of a first title since 2004.

Meanwhile, Man United are in third place on the log with 39 points, setting this up to be a cracker of an encounter.

United were 3-1 winners at Old Trafford the last time these sides met in the league and Arsenal won the match prior to that by the same score line.

Arsenal have won five of their last seven league games at home against Man United and this is only the third time they host United as league leaders.

The Gunners have also won 11 of their last 17 top flight matches against United that have been played out on a Sunday.

Newcastle ended Arsenal’s 10-game winning streak at the Emirates earlier this month, but they have not conceded a single goal since the turn of the year.

Not since being thumped 4-0 by Brentford in August have United failed to score away from home, and only two of their nine road games since have ended in defeat.

The visitors have scored in their last 16 games and this will boost their confidence ahead of the trip to North London.

Which set of fans will be the loudest after this mouthwatering fixture, Arsenal or Man United?

Click here to make your predictions and place your bet on this tie.

The game kicks off at 7:30pm Kenyan time at the Emirates Stadium.

Mohamed Elneny and Cedric Soares are both being assessed ahead of the tie but Thomas Partey and Granit Xhaka are fit and ready to start.

The Gunners have now confirmed the signing of Leandro Trossard from Brighton and he is set to make his debut here but likely from the bench.

Martin Odegaard has been in fine form and will continue to inspire the Gunners with the front three of Bukayo Saka, Gabriel Martinelli and Eddie Nketiah remaining unchanged.

For the visitors, their top scorer Marcus Rashford will continue to lead the attacking line alongside Antony as Wout Weghorst hopes to start again.

United have a historical edge over Arsenal and have won 101 out of the 237 matches played between the two teams, as opposed to Arsenal’s 86 victories.

The remaining 50 have ended in a draw, the last one coming in a barren stalemate at the Emirates in 2021.

This match has the potential to be an explosive affair as both teams come into the game unbeaten in their last 5 games.

Both teams have won 4 and drawn once in that run.

Both teams are poised to get a goal in the game with over 2.5 goals expected.

Their identical runs of form could make this a cagey affair that is likely to result in a draw.